We are on holiday in Oregon, at a little town called Cannon Beach. This is a wonderful place, famous for the rock formations and caves, and the scenery was featured in the film, The Goonies.

Even in August, the northeastern Pacific Ocean on the Oregon Coast is cold and frequently cloudy and rainy. But when the sun shines, it is amazing.

Watching the storms roll in from the safety of the porch of the condo is nothing less than awesome. The beach is uncrowded, and Amaranthus and Savvy can play to their heart’s content, running wild the way cousins have always done since time began.

Amaranthus digs bunkers, and wades waist deep in Ecola Creek where it runs into the ocean. He rides his skim-board along the edge of the ocean like a pro, using his skate-boarding skills to the max. When he steps onto the porch, he is chilled to the bone, and his 6 foot tall, 14 year-old frame is shivering. His lips are blue from the cold, and he doesn’t even have to be told to take a shower–he’s a man now. He knows what to do.

Savvy is bright-eyed and deeply interested in creating marvelous sculptures of sand, just like her mother, my daughter Christy and her Aunty Leah. All our children were keen sandcastle engineers! The girl also rides her skim-board and stays out until she is blue from the cold.

Savannah is 11 and she’s a girl, so she also doesn’t have to be told to warm up. She wants only to sit in the Jacuzzi when she finally has to abandon her sand castles.

Nephew Samuel is 16, and is fixated on riding his bike the length of the beach, from Rockaway Point to Ecola Creek as many times as he can fit into the vacation. He is also a sand castle excavator, bringing spades, a pick-axe and many other large implements for proper excavation. No matter how cold, blue and near death from hypothermia Sam is, he won’t take any advice on how to get warmed up, preferring to sit in a corner looking like death-warmed-over. Did I mention Sam is 16? 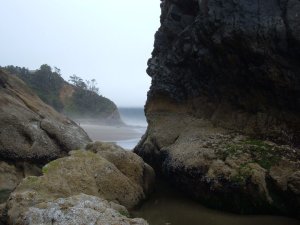 This year I’m here resting up, recovering from my surgery, and writing intense scenes for the revised version of Julian Lackland’s story. This is the perfect environment for me, and with everyone else checking out the caves on Rockaway Beach and trudging down to Haystack Rock, I have the perfect combination of peace, quiet and beautiful scenery to motivate me. Throughout the rest of the year I live for this week of writer’s paradise.

Local legend says Ursula K. Le Guin spends time writing here in Cannon Beach, which seems right since she lives in Portland, 1 hour and 45 minutes away. I know that this place inspires me more than any other place we go.

The Needles at Cannon Beach ©cjjasp 2013

The weather is frequently awful, but we know it, and we plan for it. But there will be two days of glorious skies of a blue impossible to adequately describe.

The moods of the Pacific Ocean are anything but peaceful. It is a wild, beautiful thing, that is never the same two days running.  The waves crashing against the sea stacks and  the cries of the sea birds combine with the wind to clear my mind, and at last I am free to just write.