Hunters in the Snow, Pieter Bruegel the Elder, via Wikimedia Commons

Writing, even writing fantasy, involves a certain amount of reality checking. You need to know how things actually worked.

Say you need to know what clothing the common European people wore during the renaissance looked like and how they dressed, both for celebrations, and for working.

I go to the 16th and 17th century painters and artists for that information. They always painted their subject with a heavy dose of religious allegory, but that was a part of village life–both the inquisition and the reformation was under way and the politics of religion was in the very air they breathed.

Any time you want an idea of average European village life in the Late Middle Ages through the 17th century, you need look no further than Wikimedia Commons.  There, under the heading  Category:Painters from the Northern Netherlands (before 1830) you will find the brilliant works of the Dutch Masters. These were artists living in what is now The Netherlands, and who were creating accurate records of the everyday life of the common people, along with stylized religious images.

During the 16th century, the Netherlands fought an 80 year war, trying to gain their independence from Spain, during the heart of the Spanish Inquisition. This was a period of extreme oppression and religious rebellion, and the art of times portrayed that very clearly.

I have learned, by rooting around the internet (so it must be true), that everything in the paintings of the time, no matter how commonplace, was allegorical, symbolic of some higher message. In art history (which I have always wanted to study), iconography is a visual language. This means that the way a subject is depicted and the way the image is organized, such as the number of figures used, their placing and gestures, all have specific meanings. The allegories they painted made heavy use of this visual language.

One particular family of of early Dutch painters from the county of Flanders pique my interest, the Brueghel Family. Five generations of their family were well-known painters, and print-makers.

One of my favorite early Dutch paintings is the Wedding Dance, by Pieter Brueghel the Elder:

What makes this painting so spectacular to me is the amazing detail of the clothing. They loved color. From Wikipedia: The painting depicts 125 wedding guests. As was customary in the Renaissance period, the brides wore black and men wore codpieces. Voyeurism is depicted throughout the entire art work; dancing was tabooed at the time by the authorities and the church, and the painting can be seen as both a critique and comic depiction of a stereotypical oversexed, overindulgent, peasant class of the times.

All of these people are depicted as plump, which was a desirable trait–they were prosperous and not starving. All the things that (to this day) make a great party are there: music, food, and dancing. The men wear codpieces, emphasizing their male anatomy in the same way that in today’s society, women’s breasts are hyper-sexualized.  Perhaps codpieces should make a comeback in the men’s fashion world. I’ll show off my babyfeeders, if you parade your babymaker–that way we’ll both be sure we are getting something worth having. (or not.)

Anyway, back to the renaissance. They paid taxes, and this his how their IRS office looked to Brueghel’s eldest son, Pieter Jr. As you can see, not a lot has changed between then and now–we still pay in chickens and eggs. (heh heh.)

The Payment of the Tithes (The tax-collector), also known as Village Lawyer, Pieter Bruegel, the Younger, signed P Brueghel

Brueghel’s eldest son, Pieter the Younger,  was never considered as fine a painter as his father or his brother, Jan Brueghel. He was considered a fine print-maker and his work shop was highly regarded. But he was not respected as an artist. Critics of the day felt he copied his father’s style, rather than developing his own. While he did paint in a folk-art style reminiscent of his father’s, his is sharper, more refined, taking it to the next level.

Notice how the people in the above picture are looking lean and ragged though, as opposed to the wedding picture painted by Pieter the Elder. The Little Ice Age had really gripped Europe, and times were hard.

So here is a painting by the second son of Pieter Brueghel the Elder, and a man who fathered his own dynasty of artists, Jan Bruegel the Elder. This is called People Dancing on a Riverbank and by their dress, with the neck-ruffs, you can see it depicts a wealthier class than his brother’s images, perhaps the merchant class rather than the peasants.

People Dancing on a riverbank, Jan Bruegel the elder, via Wikimedia Commons

One hundred years later, the Dutch were famous for their painters–and everyone wanted to own a Dutch masterpiece. Times had become quite hard, as the climate had cooled and crops regularly failed. Once-prosperous families often lived in the ruins of their family manors. 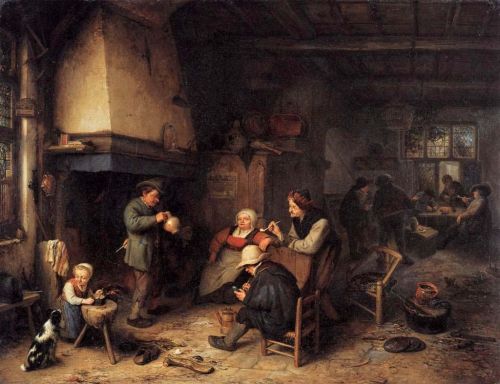 Peasants in an Interior, Adriaen Van Ostade (1661) via Wikimedia Commons

In the above picture by Adriaen Van Ostade, these peasants are living in an enormous, decrepit farmhouse, almost like squatters. They are no longer plump, and are living in filthy conditions. The fire in the fireplace is very low, as if fuel was scarce.

Another famous Dutch painting, from the same time period but showing a different segment of society is The Milkmaid, by Johannes Vermeer. In this painting, Vermeer shows an everyday task, a small glimpse of something that occurred daily in every household, a woman cooking. 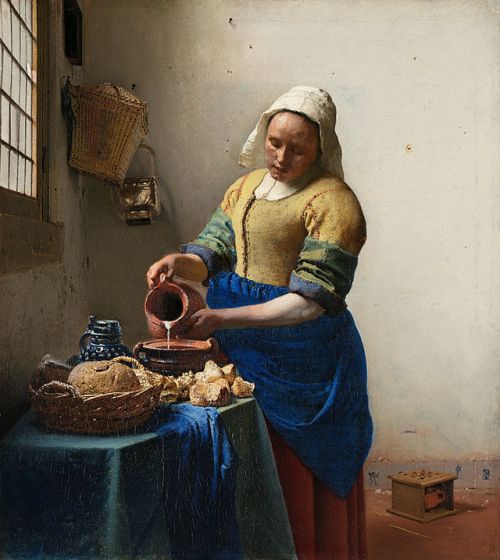 In the background on the floor is a foot-warmer which was filled with coals and was an essential luxury, showing this was one of the wealthier households.

According to Wikipedia, the fount of all knowledge: By depicting the working maid in the act of careful cooking, the artist presents not just a picture of an everyday scene, but one with ethical and social value. The humble woman is using common ingredients and otherwise useless stale bread to create a pleasurable product for the household.

I love art depicting the lives of ordinary people. I find the small details intriguing. It shows us that in many ways we are not that different than they were. We want food, decent shelter, and of course, stylish clothes to attract a mate.

And back then as it does now, a hint of anything taboo would most certainly find its way into even a religious painting.

The best part of all this is, a woman with an average education and on a tight budget (like me) can enjoy these wonderful works of art at will. I can examine them  in as much detail as I want, and take all the time I want, and no one will stop me or throw me out of their museum for loitering, because the internet is open all hours and is free.

Wikimedia Commons is a great resource to just roam around in, even when you are not looking for something specific.