#amwriting: world building: maps and the mythology of history 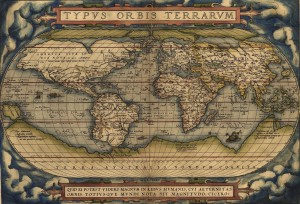 After years of work on the author’s part, regardless of whether the book is an encyclopedia, a contemporary thriller, a historical fiction, or even a travelogue with photographs, the world that the book details remains untouchable by our human hands. This is because that world only exists between those pages and in the mind’s eye.

The fundamental laws of physics bar us from going back and viewing or experiencing the reality of a historical event as a participant. We can, however, read about it, paint images of it, or make a film depicting what we believe happened during the event. This is where world building comes in.

But wait, you say. I’m not writing fantasy. I’m writing a story about France, in 1945. I don’t have to build that world–it actually exists.

I’m sorry–the world of France in 1945 is long gone. It no longer exists, except as a memory.

Let’s assume you are writing a historical accounting of the Battle of the Bulge. But, even though it may explore a soldier’s true experiences through newsreels, the pages of his diary, and  the interview you had with him, in reality, the world of this book exists only in three places:

Because we can only view history through the stained glass of time, we must accept that it assumes a mythical quality when we attempt to record it. Even a documentary movie that shows events filmed by the news camera may not be portrayed exactly as it was truly experienced. The facts are filtered through the photographer’s eye and the historian’s pen.

Your mind is the medium through which the idea for a novel or story is filtered and words are how it is made real. The key to making both fiction and non-fiction real for the reader is subtle but crucial: worldbuilding. It is worldbuilding that makes a stark accounting of incidents and conversations seem real to the person reading the book.

To build a world out of ideas and words, the author must know it well:

If you are writing fantasy you need to know what the world looks like.

Original Map of Neveyah from 2008 ©cjjasp

I love maps. My own maps start out in a rudimentary form, scribbled in pencil on graph paper, just as a way to keep my work straight. They begin looking like the one to the left of this paragraph, and evolve as the first draft of the story evolves.

Towns get renamed. They get moved to more logical places. Whole mountain ranges are moved, and forests and savannas appear where they are supposed to be. Over the course of writing the first draft, my world becomes real and the pencil sketch  map will become the digital art you see below.

In my books, people are going hither and yon with great abandon, and if I am not really on top of it, the names of towns will evolve over the course of the novel–Maudy will become Maury (this actually happened) and distances will become too mushy even for me. The map is my indispensable tool for keeping my story straight.

When your characters are traveling great distances, they may pass through villages on their way, and if these places figure in the events of the book, they should be noted on the map. This prevents you from:

Perhaps certain things will impede your characters. If they are pertinent to the story, you will want to note their location of on your map so that you don’t contradict yourself if your party must return the way they came:

If your work is in sci-fi, consider making a rudimentary star-chart, if space-travel is a part of your tale. For Sci-fi, you might want to know:

In the narrative, if you are writing fantasy, I suggest you keep the actual distances mushy because some readers will  nitpick the details, no matter how accurate you are. Yes, you wrote it, but they don’t see it the way you do. This is because their perception of a league may be three miles while yours might be one and a half. Despite the fact that a league has no finite length and is whatever the author decides it is, some readers feel their opinion is of such worth that they will never back down. They will become so annoyed by this that they will give your book a three-star review, simply because they disagree with the length of time your character took to travel a certain distance.

From Wikipedia, the fount of all knowledge: “A league is a unit of length (or, in various regions, area). It was long common in Europe and Latin America, but it is no longer an official unit in any nation. The word originally meant the distance a person could walk in an hour.[1] Since the Middle Ages, many values have been specified in several countries.”

Therefore, a league is what you say it is, within some loose parameters. I go with the distance you can walk in an hour, but you have to take into consideration the terrain.

Huw the Bard takes two months to travel between Ludwellyn and Clythe. In his story, Huw Owyn is walking through fields, woods, and along a several winding rivers for the first half of  his journey. He has to backtrack as frequently as he goes forward in order to sneak around those who would kill him. It’s only safe for him to walk on the main road once he makes it to Maury, weeks after fleeing Ludwellyn.

It is a stretch of road that he could have done in two weeks if he had been able to stay on the main road, and if he hadn’t had to do so much backtracking. But that inability to make progress creates opportunities for tension.

Readers love to see maps in the front of books, but you don’t have to put yours there if you don’t like your own handiwork. This map can be only for your purposes, so you will know in a concrete way where every town and village is in relation to your story.

Fantasy readers like maps. If you choose not to include your map in the finished product, consider hiring an artist to make your map from your notes. Because I am an artist, my pencil-drawn map always evolves into artwork for the book.

Every book, fiction or non-fiction, takes an idea, translates it into words, and dares the reader to believe it. It is our job as authors to take what is intangible and make it seem real to the reader who is experiencing the world and a moment in history through our writing.

11 responses to “#amwriting: world building: maps and the mythology of history”