#FlashFictionFriday: remembering Mama and the year of the tipsy reindeer #christmas 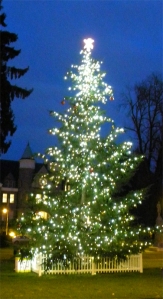 I live in a very small town. The residents here go all out decorating their houses and yards for the month of December. It makes for a wonderful drive after dark, just cruising the local neighborhoods admiring the inventive displays.

The city maintenance department decorates the main drag through town and it looks amazing. I wish we could have those awesome lights up all winter long. They make the long, dark nights feel so much kinder.

All up and down our street, homes are decorated for the season, but our home is always quite simple in its holiday decorating–a tree, candles, a cute centerpiece for the table. Outside, my hubby puts up small lighted displays,  but nothing too fancy.

We keep it simple because we have to tear it down and put it all away over New Year’s day, and that rapidly becomes a bore.  It’s work, and I don’t like anything that falls into the category of labor.

In 2008, my mother was terribly ill with lung cancer and was living with us in her final days. She was 82, and had always been an active, hardworking woman, managing a pizza parlor, and wrangling my eccentric, alcoholic father. She had kept an immaculate home with religious zeal, and maintained her garden just as neatly.

It was a sign of just how ill she was that she allowed me to move her into my home so I could care for her.

My hubby had set up the lighted reindeer  display: three sweet reindeer made of wire and white lights. However, the snow was quite deep, and around their little electric feet it would melt from the heat of the lights, but not evenly.

The little one kept falling over, which looked awful as compared to the neighbor’s fancy displays. Every day, Mama checked on that reindeer first thing in the morning, wanting to get out there and fix it herself, but she was too frail.

The disease had taken her health, but it hadn’t taken her sense of humor. The snow provided a form of entertainment for her, and she would laugh and make all sorts of ribald comments as she watched me or my hubby try to stand the rickety Rudolph back up and attempt to anchor it  more securely into the frozen turf.

No matter how we tried, our display that year was the lamest one on the street, with our neighbors pointing and laughing at the prone reindeer as they walked to the grocery store. We would check on it and make sure it was upright before we went to bed, but it never failed–sometime during the night, the wind would blow that one particular reindeer over. 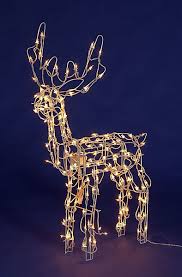 One morning, a few days before Christmas, I was in the kitchen, and Mama was looking out the front window, talking on the phone to my Aunt Lillian. “That littlest reindeer is a terrible influence. Usually he’s the only souse in the lot, but today we have a yard full of drunken reindeer.”

Aunt Lillian said something, and Mama replied, “I’m not joking. The whole herd is passed out in the snow. Either that, or we had a drive-by shooting and the reindeer were the casualties.”

Sure enough, when Greg went out to go to work, all three electric reindeer were laying on their sides.

That was Mama’s last Christmas.

I miss her when the neighborhood is decorated like wonderland and the yard is full of snow. She loved life so much and clung to it fiercely despite the chemo and the vile disease that was killing her.

This year, snow is falling again, and we will put up some sort of display, although the reindeer have long since gone to broken ornament heaven.

Somehow, decorating for Christmas isn’t the same without them.

4 responses to “#FlashFictionFriday: remembering Mama and the year of the tipsy reindeer #christmas”