#FineArtFriday: Saint George and the Dragon by Paolo Uccello 1470 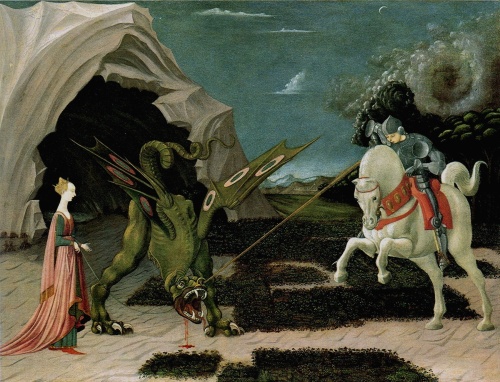 The above painting by Paolo Uccello, from around 1470,  is a surreal, stylized retelling of the legend of Saint George and the Dragon. The legend tells of the knight slaying a dragon that demanded human sacrifices. With the slaying of the dragon, the hero has saved the princess who was chosen to be the next offering.

Done in oil on canvas, the painting was one of the last of Uccello’s creations.

According to Wikipedia, the Fount of All Knowledge: The narrative (of Saint George) has pre-Christian origins (Jason and Medea, Perseus and Andromeda, Typhon, etc.),[1] and is recorded in various saints’ lives prior to its attribution to St George specifically. It was particularly attributed to Saint Theodore Tiro in the 9th and 10th centuries, and was first transferred to Saint George in the 11th century. The earliest narrative record of Saint George slaying a dragon is found in a Georgian text of the 11th century.

About the Artist (via Wikipedia)

Born Paolo di Dono, his nickname, Uccello (of the birds), came from his fondness for painting birds. He worked in the Late Gothic tradition, emphasizing colour and pageantry rather than the classical realism that other artists were pioneering. His style is best described as idiosyncratic (eccentric or unique), and he left no school of followers.

With his precise and analytical mind, Paolo Uccello tried to apply a scientific method to depict objects in three-dimensional space. In particular, some of his studies of the perspective foreshortening of the torus are preserved, and one standard display of drawing skill was his depiction of the mazzocchio.[10]

In the words of G. C. Argan: “Paolo’s rigour is similar to the rigour of Cubists in the early 20th century, whose images were more true when they were less true to life. Paolo constructs space through perspective, and historic event through the structure of space; if the resulting image is unnatural and unrealistic, so much the worse for nature and history.”[11]

The perspective in his paintings has influenced many famous painters, such as Piero della Francesca, Albrecht Dürer and Leonardo da Vinci, to name a few.

4 responses to “#FineArtFriday: Saint George and the Dragon by Paolo Uccello 1470”