Today we’re looking at the sometimes confusing apostrophe. It has many uses, but I will only delve into the most common ways we use it in creative writing today.

In creative writing, the apostrophe is a small morsel of punctuation that, on the surface, seems simple. However, certain common applications can be confusing, so as we get to those I will try to be as concise and clear as possible.

First up, we all know that we use the apostrophe to denote possession:

Where this gets a little tricky is in the possessive form of a surname when it refers to the whole family. In this case, you insert a grammatical article (the) and make the name plural, and then add the apostrophe:

When two or more people (or other entities such as businesses) are described as separately owning something, each name should be in the possessive form:

However, if Ralph and Janet share possession, include an apostrophe and an s after the last name only:

In some cases, we need to use plurals of abbreviations. In a military thriller, you might need to say, “They disarmed several IEDs.” (We would not use an apostrophe: IED’s.)

Writing a year numerically has been an area of confusion for me. This is because I rarely have had to write years in this way until recently and the use of an apostrophe for this is now considered outdated. However, this is how they should be written:

An apostrophe should follow a number only if it is possessive.

Numbers are frequently written numerically when writing books for middle grade and YA readers, as these stories often center around schools and sports.

A single digit, such as 7, is made plural with the addition of an s: 7s

Insert an apostrophe to denote possession when you must use a number to stand in for a person in an article, such as when an athlete is identified by a uniform number:

Contractions can be confusing. Two words made into one word are joined by an apostrophe:

Conjunctions also can be tricky.  Simply add an s, such as in the phrase “There are no ifs, ands, or buts about it” or “A list of dos and don’ts follows.” We do keep the contractive apostrophe in don’t and simply add an s to make it plural.

Sometimes a single letter looks awkward when we just use an s to indicate plurality.

When pluralizing capital letters, we don’t use an apostrophe: Mike earned three Ds in English this year but still passed the class.

In a narrative, the two most common missions apostrophes have are to denote possession or indicate a contraction.

Note that for both they and it, there is no apostrophe in the possessive form.

In most English words an apostrophe indicates possession but can also indicate a contraction. The difficulty arises in the fact that both it and they are frequently part of contracted words.

In the effort to standardize English usage, early linguists made a choice to eliminate the apostrophe in the possessive form. They did this in the (futile) hope of ending confusion.

As with so many things that “seemed like a good idea at the time,” its and it’s will always cause problems for new and beginning writers. Inadvertent misuse happens even for old hands like me when I’m zipping along laying down the first draft of a manuscript, especially during NaNoWriMo. 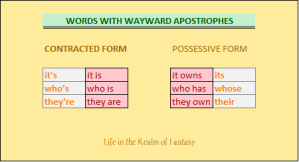 We have to be vigilant and ensure we have looked for proper usage of its and it’s during revisions. Even the big traditional publishing houses admit sneaky errors like those like to go unnoticed until after publication.

In closing, the most common uses of the apostrophe aren’t too difficult once we learn the rules. Remember, apostrophes are integral parts of the traffic control system, signals that keep your words moving along at the right rate. Using them the way they are intended (and which readers expect) keeps the reader from throwing your book away.

I always suggest you set some time aside for writing new words every day, even if only for fifteen minutes. When we force ourselves to think about and use the basic rules of grammar regularly, we retain what we have learned.

Tagged as apostrophes, its or it's, writing, writing craft

26 responses to “The Apostrophe #amwriting”