The stories that interest me most have a strong character arc.  The protagonist begins as one sort of person, and through the events they experience, they are transformed. Often they change for the better, but sometimes the change is for the worse.

Each time I open a new book, I want to meet a circle new of friends, each of whom is distinguishable from the other characters. Every one of them must be a unique person with a distinctive thought process. What choices will they make, and how will those decisions affect their life?

Consequences are key to the forward momentum of the plot.

I have used the word consequences before when talking about the choices our protagonist must make. I use that word intentionally. If there are no consequences for bad decisions, what is the story about?

Equally, I want the side-characters and antagonist to be just as singular with their reactions and choices as the protagonist is.

A bit of unpredictability to a character’s nature keeps them interesting. They have an air of mystery—how will they react in a given situation? It must be slightly random, but please, keep it real and in character.

In other peoples’ work, I particularly notice when a protagonist or side-kick’s gut reaction causes them to act out-of-character for the person they have been portrayed as, up to that point. Am I able to see it in my own? I hope so.

Even in a fantasy setting, all the characters must be believable. If the author introduces an elf to me, I want to believe in that elf. I want to see him/her as if they are real throughout the entire story. I want to be invested in them for their entire arc, and I want to care what happens to them.

The motivations are crucial. What drives them and what will they do to achieve their goal. Just as importantly, what will they NOT do? What is out of character for them?

The obstacles your characters face and the choices they make in those situations are the story. Giving your characters an active role and allowing them agency is what drives a great, absorbing story. Agency is the power of an individual to act independently. When we give the protagonist/antagonist agency, we allow them to make their own free choices.

When I am first writing any story, giving my characters agency is difficult to do. This is because, in the first draft of my manuscripts, the motives of my protagonist haven’t quite come into focus for me. I tend to allow a character’s choices to push their personal growth.

At some point in every great novel, the protagonists may lose their faith or have a crisis of conscience. In the second draft, I see this moment as an opportunity to learn who they really are as individuals. The events leading to that point break the character, knocking them down to their lowest emotional state. How do they react? What keeps them pushing on in the face of such despair?

At times, I have a character I simply can’t figure out. I do a character study, and in that short document, one of the questions I ask myself is “What personal revelations come out about them?” Also, I ask, “What does he discover about himself?” 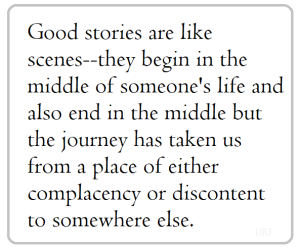 When those questions are answered, I look at the final event, the situation that ends the story. These people’s personal quirks and characteristics, their moral compass influenced the decisions that led them to that place.

Did I keep those clues distinct to that character, or was there a blurring of personalities, making the group all sound and look alike?

Most importantly, those people must have understandable motivations. We can’t be too obscure in trying to keep the air of mystery because if a reader can’t follow our protagonist’s reasoning, we haven’t done our job.

It’s part of the balancing act—creating intrigue yet making it believable. As I have said many times, this is a gig where I never stop learning and trying to grow in the craft. Reading is the key. Every story that leaves a mark on my heart has unique, individual characters that I can relate to. Even if I don’t like them, their motivations make sense because they are in line with how that character would think.

If I can visualize my characters as real people that I know and believe in, hopefully my readers will believe in them too.