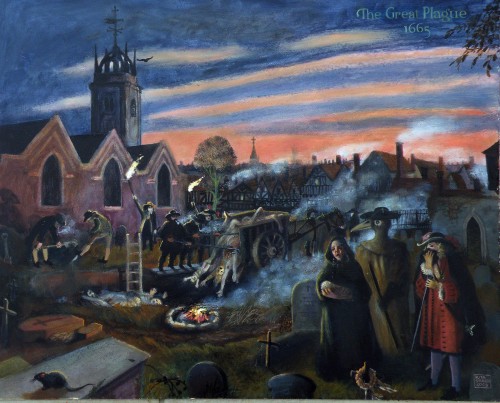 Description (via Wikimedia Commons): Like many who could afford to, Robert Hooke left London for six months during the worst of the bubonic plague. All cats and dogs were destroyed as a preventive measure. This allowed rats to flourish and spread the disease which was carried by their fleas. The image shows a scene of horror. After sunset carts were driven through the streets to collect the dead. They were taken to the nearest graveyard to be buried in plague pits. Fires burned to make smoke. Pipes of tobacco were smoked, posies of herbs worn, and faces covered with masks. This was thought to be protection against contagion. London was overwhelmed with fear, terror and grief. It is thought that as many as 100,000 perished in London alone.

Source/Photographer: The original is an oil painting on board by Rita Greer, history painter, 2009. This was digitized by Rita and sent via email to the Department of Engineering Science, Oxford University, where it was subsequently uploaded to Wikimedia.

Rita Greer paints history as if she lived it, with meticulous detail. In this street scene, she manages to capture the despair and hopelessness that pervaded London with the advent of the plague. This scene is dark, and filled with emotion. Death walks the smoke-hazed streets, feeding on tragedy. Grief and fear are the driving forces, and no one’s family is spared.

This year, 2020, feels like an apocalypse year, in many ways. It helps to keep in mind that for London and all the great cities of Europe, 1665 was worse.

Rita Greer is a history artist, goldsmith, graphic designer, food scientist and author/writer. On retirement in 2003 Rita began the Robert Hooke project, “to put him back into history.” Much her work is available to be viewed at Wikimedia Commons, Category: Paintings by Rita Greer.

Comments Off on #FineArtFriday: The Great Plague 1665 by Rita Greer 2009