Here we are, entering the second week of National Novel Writing Month. It’s a good time to review the rules for the punctuation that we use (and abuse) so regularly. This essay first posted on March 14, 2018, so if you’re already up on these rules, thank you for stopping by and happy writing!

First up, the semicolon.

This joining punctuation is not complicated, once you know the one rule about when to use semicolons:

If you join two clauses with a semicolon, each clause must be a complete sentence, and they must relate to each other. In other words, they must be two short sentences expanding on ONE idea. 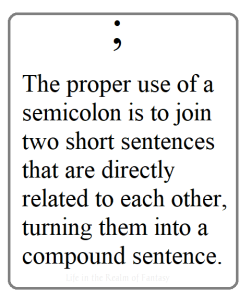 If your two short sentences don’t relate to each other, use a period at the end of each clause and make them separate sentences. You’re an author, for the love of Tolstoy. Use your creativity and reword those little sentences, so they aren’t choppy.

Two separate ideas done wrong: We should go to the Dairy Queen; it’s nearly half past five.

The first sentence is one whole idea: they want to go somewhere. The second sentence is a completely different idea: it’s telling you the time.

Two separate ideas done right, assuming the mention of time is important: We should go to the Dairy Queen soon. They close at eight, and it’s nearly half past five.

If time is the issue in both clauses and you want it to be once sentence, use a semicolon, reword it to say, “The Dairy Queen is about to close; it’s nearly half past five.”

On the other hand, you can join them with the em dash. My personal inclination is to find alternatives to both semicolons and em dashes, as they can easily create run-on sentences.

I don’t dislike them, as some editors do, but I think they are too easily abused and misused. My rule for you is this: Semicolons should not be used if you are in doubt.

Some authors will do anything to avoid using a semicolon, which is ridiculous. However, they see their work is a little choppy, so they join the independent clauses with commas.

That is a grammar no-no. You do not join independent clauses (clauses that can stand alone as separate sentences) with commas as that creates a rift in the space/time continuum: the Dreaded Comma Splice.

If you join independent clauses with commas and we all die, you’ll only have yourself to blame because I did warn you.

Comma Splice: My car is a blue Chevy Malibu and I like it, the dog likes to ride shotgun.

Same two thoughts, written correctly: My car is a blue Chevy Malibu, and I like it. The dog likes to ride shotgun.

But what do we join with commas? Commas are the universally acknowledged pausing and joining symbol. Readers expect to find commas separating certain clauses. Some simple rules to remember:

We do use commas to set off introductory clauses:

I italicized the introductory clause in the above sentence to show that it is not a stand-alone sentence. This clause introduces the clause that follows it, and its meaning is dependent on that following clause.

A comma should be used before these conjunctions: and, but, for, nor, yet, or, and so to separate two independent clauses. They are called coordinating conjunctions.

However, we don’t always automatically use a comma before the word “and.” This is where it gets confusing.

Compound sentences combine two separate ideas (clauses) into one compact package. A comma should be placed before a conjunction only if it is at the beginning of an independent clause. So, use the comma before the conjunction (and, but, or) if the clauses are standalone sentences. If one of them is not a standalone sentence, it is a dependent clause, and you do not add the comma.

Take these two sentences: She is a great basketball player. She prefers swimming.

I hear you saying, “Now wait a minute! My English teacher very clearly taught us to use commas to join clauses.”

I’m sorry, but she probably did explain that exception. It just didn’t stick in your memory.

Two complete ideas can be joined with ‘and’ and you don’t need a comma.

Think of it as a list: if there are only two things (or ideas) in a list, they do not need to be separated by a comma.  I am buying apples and then going to the car wash.

If there are more than two ideas, the comma should be used to separate them, with a comma preceding the word ‘and’ before the final item/idea. This is called the Oxford comma, or the serial comma.

I must buy apples, go to the car wash, and then go to the library. 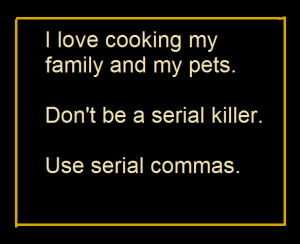 Oh yes, my friend. We do use serial commas to prevent confusion. In March of 2017, the New York Times reported that the omission of a comma between words in a list in a lawsuit cost a Maine company millions of dollars.

One habit I had to unlearn the first time I sent my work to a professional line editor:

Grammar doesn’t have to be a mystery. If we want to write narratives that all speakers of English from Seattle, to London, to Mumbai, and to Brisbane can read, we must learn the simple common rules of the road. To this end, I recommend investing in The Chicago Guide to Grammar and Punctuation. It is based on The Chicago Manual of Style but it’s smaller and the contents are easier to navigate.

If a sentence feels muddled but you think a reader won’t notice, you are wrong. Be a little daring… crack open the grammar book or go online and look up the rules. You will become more confident in your writing, and your work will go faster.