My impressions of Windows 10

I got this machine in Jan 2012, and it just happened to come with the newer style of touchscreen. I have a HP Touchsmart 320 PC, but even though it was WIN 8 ready, I never went with WIN 8 because, for what I do, I prefer to use a mouse, and at that point (in 2012) I wasn’t sure that I liked the “swipe and go” method.

So, I’ve had Windows 10 now for about a week. It was different, being in the first wave of folks making the change from WIN 7 to 10.  I lost pretty much of an evening to making the switch, but you do expect that, when you upgrade something as fundamental as your OS (operating system).

So far I like it. Good job Microsoft–it works on my machine as it was designed.

It’s fairly easy to navigate, and I had no trouble seeing everything on the screen. (I have elderly eyes, so this is a good thing). It looks good.  You can easily access the task screen.

My only complaint was that at first Windows Live Movie Maker seemed to be lacking all the transitions I was used to. But they are back now and I am pleased. I don’t know if that is because of an update or what, but I was fairly unhappy when all but four transitions were unavailable. 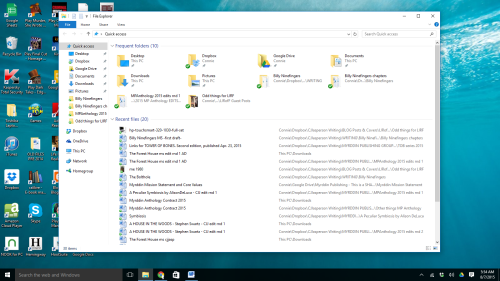 I have just received the invite to subscribe to the new MS Office. I have it on my devices and I will be checking it out to see if that subscription covers my PC as well. I have to say, I like Office 2010, and am not that keen on switching, unless it is so awesome that I can’t resist the awesomeness. So I will be doing a little research on that.

For Dave Cantrell’s view of WIN 10, check out his recent post at Dave Said It.

3 responses to “My impressions of Windows 10”