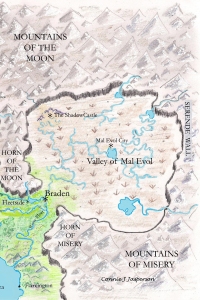 When I am reading a fantasy, I can get completely immersed, if the author has been kind enough to use a mix of familiar earthly landscapes to create his world.  Readers do need to have a small bit of “the known” to hang their imaginations on.

In my book, Tower of Bones, I write about a landscape that has been devastated, first by war, and secondly by the slow, deliberate poisoning of the environment.  The God, Tauron, seeks to change Neveyah into a copy of his own desert world of Serende.  At the time of our story, the immense crater Valley of Mal Evol is a wasteland of thorn-bushes and scorpions.  Few people live there, and those who do are slaves to the Legions of D’Mal, the minotaur soldiers of the Bull God.

The World of Neveyah is actually the state of Washington, in all its bipolar glory, but “on steroids.”

The God Tauron carved the Valley of Mal Evol out of the mountains when he imprisoned his brother. That created the landscape that was not unlike that of Eastern Washington, some of which was carved by a disaster. Before the disaster, this land was likely similar to the area around Spokane and toward Colville, prairies with large forests of lodgepole pines. 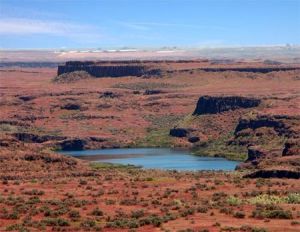 The Channeled Scablands are a relatively barren and soil-free landscape on the eastern side of the  state of Washington near Grand Coulee Dam, and Dry Falls. It’s an area that was scoured by floods unleashed when a large glacial lake drained at the end of the last ice age. I took this landscape and magnified it, making it the place where two vastly different worlds touch.

I live 60 miles due north of Mt. St. Helens, an active stratovolcano that has erupted several times in my lifetime. As a teenager in the fall of 1970, 10 years before the eruption, my earth-science class visited the lava-tubes that were popular tourist destinations in those days.  The volcano was considered to be of no threat to anyone, practically dead, really.

Mt. St. Helens from Spirit Lake prior to 1980 via ABC news

As this photo shows, it had a beautiful shape to it, like Mt. Fuji, and was featured on calendars and postcards for its beauty and majesty.  The verdant forests were tall and thick, mostly Douglas Fir and Western Red Cedar.  Spirit Lake, at its base, was a playground for summer vacationers.  My family spent many summer holidays at the campgrounds and the lodge there. 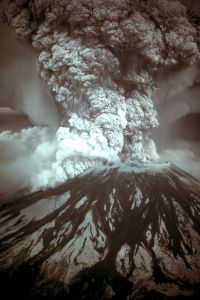 All that changed overnight on May 18th, 1980, when the mountain erupted.  We could see the ash column quite clearly from the lake in the Bald Hills of Thurston County, where we were fishing that morning, and we knew something really bad had happened at the mountain. Entire forests were blown down and buried under volcanic ash. Spirit Lake was both destroyed and reborn in a different form.

The destruction of the ecology is one of the underlying themes of the World of Neveyah series.

But the miraculous way the land around Mt. St. Helens has rebounded in the last 35 years is also working its way into my World of Neveyah–Tauron’s spell is broken, and the land will recover.  The devastation of Mal Evol looks permanent, and is terrible to those who know what it once was like, but they have hope that it will recover.

In the World of Neveyah series, I created the Mountains of the Moon, out of which the valley of Mal Evol was torn. I understood how mountains can rise high into the sky, blocking the rising or setting sun. Also, I used the climate of the Scablands here in Washington–the climate is typified by large seasonal temperature differences, with excruciatingly hot  summers and severely cold winters, and that is how I made Mal Evol. Remember, dealing with weather offers great opportunity for mayhem in the narrative.

I live on the heavily forested western side of the state, 50 miles west of 14,411 ft tall  Mount Rainier, beneath the Nisqually Glacier. That sight dominates my front-yard skyline on a clear day. The valley I live in was carved by glaciers and eruptions from this amazing pile of rock, ice, and fire. I took this idea, but I made my mountains taller and badder than the Himalayas on a bad Mt. Everest day. 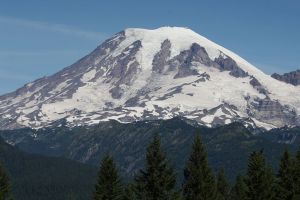 We here in our bipolar State of Washington are able to see how the landscape can radically change if you just drive  east (thank you Scott Driscoll!) on I-90 for four hours.

Because  of my good fortune of living in the shadow of two large volcanoes, and between two high mountain ranges, the Olympic Mountains and the Cascade Range,  I have the opportunity to experience a wide diversity of ecologies in one day, going from saltwater to mountain range, to desert.

You may find your inspiration elsewhere. It could be in anything from architecture to ornamental gardens, to cornfields or sage brush. 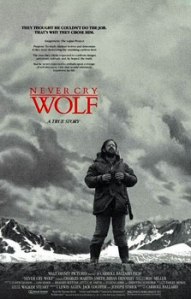 While the window of our own experience is an amazing place to find our inspiration for our fantasy environments, the internet is a valuable tool. Google Earth is a wonderful resource for viewing a real-time image of an area you need to see to understand.

Google Earth is as much of a squirrel as Facebook is, in that I got very little done when researching with it–I’m sure it was all research. Really.

Consider going to the movies–it’s amazing what great scenery you will find in an old movie. One thing I don’t have access to experience in person is wild caribou–for that reason much of my mental imagery for how wild herd animals of North America behave and the environment in which they live comes from a great movie, called Never Cry Wolf. The cinematography and the actual scenery is incredible, and the mood of the land is captured in one of the better films of the twentieth century.

The root ideas are what you hang the fabrication on, just a frame for the canvas you will paint with your words. It’s your world, but if it is to feel solid to the reader, there must be some small familiarity for them to have that  “Oh, I know this place” moment.