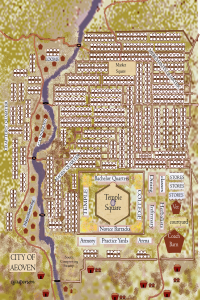 On May 1st the final book in the Tower of Bones series, Valley of Sorrows,  will launch. I can’t tell you how much this means to me, to have Edwin’s story complete.

This story winds up two threads, and takes place partly in the Braden Gap, and partly in Aeoven. That gave me the opportunity to draw some new maps, which really made me happy.

And, this book may wind up Edwin’s story, but there will be more tales set in Neveyah–I love that world and the people too much to just walk away from it.

Valley of Sorrows spawned a spin-off book:The Wayward Son. That book is on the editor’s desk and set to be published in August 2016. It is a companion book that takes place concurrently with Forbidden Road and details some, but not all, of the events that occurred in Aeoven during Edwin’s absence.

The way I ended up writing a companion book is that the original manuscript of Valley of Sorrows was really two separate stories. I didn’t want John’s thread to take away from Edwin, Freidr and Zan’s story, but his background is intriguing–so I took him back to the day he returns to Aeoven, the same day Forbidden Road opens.

While the two stories dovetail in some places, and characters make cameo appearances, this book is not so much a book about the action as it is about a man learning to live again, despite his battle related PTSD.

Two years ago, when I pulled Tower of Bones and Forbidden Road for re-editing I made a bold move–I changed the name of a once-minor character, from Marta to Halee.  I did this, because she suddenly had a major role to play in the both the Wayward Son and the last quarter of Valley of Sorrows. and her name was only one letter off from Marya’s name: Marta…Marya–and they were often in the same scene together. Both books have been selling fairly well and so far, if anyone has noticed, they have not complained.

I really like the way Edwin’s story has gone. In this book he is a good, decent man, who has been pushed to nearly the breaking point, but he is still doing what he has to. As I said, this story ends very differently from what I had originally planned, and I wrote the ending both ways. If you really are curious as to how it ends the book is available for preorders now at Amazon and will go live on May 1,2016:

The long-awaited conclusion to the Tower of Bones Series

A grieving man whose life has gone to hell in his absence,

A son whose action sealed his father’s fate,

A crippled warrior facing his future,

A broken soldier seeking redemption for an unspeakable crime…

Driven by prophecies and racing against time, four mages sacrifice everything in a final bid to save their world from the Children of the Bull God. Can Edwin Farmer  raise the new shield before Lourdan and the Legions of Tauron arrive to conquer Braden?

The Gods are at War, and Neveyah is the Battlefield.

I will be celebrating Earth Day in Olympia, Washington at the Procession of the Species and the Arts Walk. Local authors Shannon L Reagan, Jeffrey Cook, Lindsay Schopfer, Lee French, and I will be down at The Pet Works at 4th and Adams for both days of Arts Walk, which runs 5 pm-8 (or maybe 10) on Friday, 4/22 and also from 12 pm-8 on Saturday, 4/23. We’ll be signing books and generally having a blast. A lot will be happening in the parking lot, and several other artists will be sharing the space with us.

3 responses to “#amwriting: Valley of Sorrows”