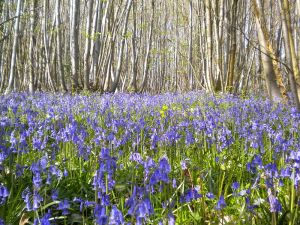 Over the weekend, I discovered how to make charcoal, in a sustainable way, learning how it was done in medieval Europe. Of course, I learned about this by going to the internet, to one of my favorite go-to sites for research: Medieval Histories.

I’ve read before about how the massive production of charcoal in the Middle Ages was a major cause of deforestation—everyone needed it to heat their homes, and entire economies depended on it.

However, as time went on, people learned how to create sustainable sources of wood for both firewood and carpentry, by coppicing. Coppices were cut and regrown cyclically so that a steady supply of charcoal would be available.

Archaeological evidence for this style of forestry management goes back 5,000 years in England. Timber in the Sweet Track in Somerset (built in the winter of 3807 and 3806 BC) has been identified as coppiced lime trees (also known as linden or basswood).

According to the Fount of All Knowledge, Wikipedia: Coppicing is an English term for a traditional method of woodland management which takes advantage of the fact that many trees make new growth from the stump or roots if cut down. In a coppiced wood, young tree stems are repeatedly cut down to near ground level. In subsequent growth years, many new shoots will emerge, and, after some years the coppiced tree, or stool (what we think of as a stump), is ready to be harvested, and the cycle begins again.

So, in doing research for a tiny portion of my new, just begun work-in-progress, I learned something new.

Over the years, when I tell people what I write, some have laughed and said I’m lucky I write fantasy because I can make any old thing up and it will fly.

Nothing could be further from the truth. I spend hundreds of hours researching the most trivial details for every book I write. If I get it wrong, it’s because I failed to do the research. In the process, I’ve learned as much as many medieval scholars about how people dressed, what they ate, how they earned a living, how they preserved food and every intimate detail of their lives that is researchable.

I know all of this because I read scientific papers written by experts on the subject, all of which are available to us via the internet. My files are full of the fruits of other peoples efforts, with the sources documented and the authors credited so I know where to go to find out more if I need to. Lists of links to websites for further research is critical because when one book goes to press, a new book is already falling out of my fevered mind and onto the paper.

Readers are smart. If something is impossible, and you don’t somehow make it probable, you will lose your readers. The best way to make the impossible probable is to mix your fantasy with a good dose of real history. Be historically accurate as often as you can, so that when your blacksmith makes a weapon, readers who know about smithing will not be jarred out of the story by inaccuracy.

Most of the time, these things you spend untold hours researching will only get one line in your narrative, but if that line is inaccurate or impossible your readers will know you were too lazy to do it right.

This is my short list of go-to websites for in-depth, accurate information for when I am writing. They are fairly self-explanatory: 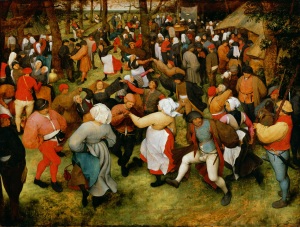 I’ve learned a great deal from reading the literature of medieval times. If you really want to know how people lived, read a modern translation of Chaucer’s Canterbury Tales. They were bawdy, irreverent, and loved nothing more than a good joke. If you want to know how they dressed, look no further than the “The Wedding Dance” a literal painting, steeped in allegory by Pieter Bruegel the Elder.

The internet is your friend, and researching your fantasy novel can be incredibly entertaining. For me, that is what slows me down more than anything. I spend far too many, but happy, hours on Wikimedia Commons, looking at 16th-century Netherlandish paintings.

Tagged as 16th-century Netherlandish paintings, Coppice, how to research your novel, Pieter Brueghel the Elder, The Wedding Dance