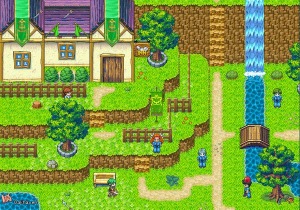 I spend a certain amount of time playing computer games, especially when I am trying to avoid doing any serious writing. And just like the books I read when dodging work, I love to talk about whatever game I’m playing. Today I am reviewing Stargazer, which was published in 2015.

I love old-school, indie-built, computer Japanese-style RPGs, and Stargazer, created by John Wizard in association with Amaranth, is one of the best games I’ve played in years. I’ve played it through four times over the last year, setting Aura’s magic up differently each time, and have not run across any glitches or bugs. Yay for that!!!

Magic no longer exists in the world, but Zach, stargazer and dreamer, doesn’t really believe that. The game begins when a meteor falls from the sky, and Zach goes to investigate it. He manages to avoid the Chancellor’s goons and discovers a girl who is suffering from amnesia. She thinks her name is Aura. There is an instant attraction there, and Zach is smitten. Their adventures begin, and they meet Scarbeck (a detective) Thyme (a healer) Grayson (a noble, but scary, knight), Kala, (has magic and rides a Firewing bird) and Amelia Mae (a 14-year-old genius).

Their romance is sweet, but not without stumbling blocks. There is no doubt how Zach and Aura feel about each other, but as for Thyme and Grayson…it’s a rocky road to the altar. And, in true Amaranth fashion, unless all the right criteria are met throughout the game, you won’t gain attraction points, and there will be no weddings.

The story line is a good fantasy story with a great quest, and the dialogue is hilarious, rife with snark and sarcasm.The art and graphics are excellent, colorful and highly detailed. Each setting is fun to roam around in. If I have any complaint, it’s the amount of walking back and forth over the same ground that one has to do to complete the many tasks, but that’s a minor irritation–the story keeps it interesting.

The dungeons are difficult but not impossible, and the puzzles are challenging. The creatures are fun, and some are hard to beat, but you do gain strength, so nothing is impossible. You do have to be careful with the gold in order to get the best armor and weapons, as there are no goodie caves or secret weapons/armor stashes, although you can gain some good armor and weaponry in treasure chests.

Shybeard’s ship and Mala (the Firewing Bird) are delightfully hokey in an enlarged SNES Super Mario kind of way. Hawkeye is the lone graphic that is pretty much indecipherable.

The final battle is fun, and if you have met all the right criteria and gained enough attraction points for the two marriageable couples, you will get two weddings at the end. Or not, but either way, it’s a great game.

This is a terrific way to spend 25 or so hours, as there are over 200 puzzles and side quests to complete, all of which advance the story.

Amaranth and John Wizard are my 2 favorite indie RPG game makers, and they have lately collaborated with each other on several other games. Built using RPG Maker, their games are reminiscent of the old Enix/Square Soft games, for the Super Nintendo with strong story lines and fun side quests. They are as much fun as The Legend of Zelda, or Chrono Trigger or any early Final Fantasy game ever was. 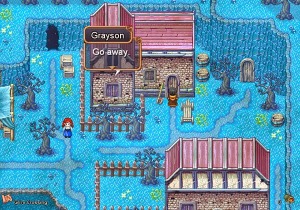 Stargazer is available from John Wizard, or Aldorlea, or on Steam. This game is not for sale on the Aveyond.com website, which is what Google queries for Amaranthia redirect to. Amaranth has undergone some serious changes over the last year and their website is no longer the fun place it was, although gamers and indie game creators can still meet and discuss gaming and game creation in some limited forums.

I am not sure what to make of that—even though the John Wizard site redirects Stargazer questions to Aveyond, there are no forums there to discuss Stargazer, and the game does not appear on their website.

Regardless of that mystery, I give Stargazer 5 full stars, with no reservations whatsoever—I love this game.