I read a lot, and I’ve become a fan of audio books, especially when I am editing for clients or wrangling tough plot points in my own manuscripts. It frees my mind to enjoy more books when I can put on the wireless headphones and cook or do my house work and never miss a thing.

My current audio book is Tad Williams’ new novel, The Heart of What Was Lost. It was only launched yesterday, and I’m already about six hours into it. (And so far, WOW!) I bought the hard-copy, but also downloaded the Audible book, because I have a monthly subscription. Andrew Wincott is the narrator, and he’s an incredible reader. His narration makes this one of the best audio books I’ve ever listened to. 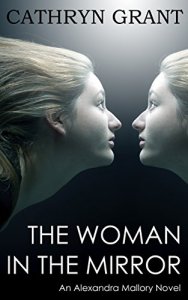 While I love audio books, I do still read my Kindle, and one I recently read and enjoyed was The Woman in the Mirror by Cathryn Grant. Published July 01, 2016,  it is a dark, contemporary tale, a psychological thriller. The many twists and turns make what could have been a rant on misogyny and abuse into a many-layered mystery you never quite get to the bottom of. The book is set on the foggy central coast of California, in a house perched on the edge of the crumbling cliff. The precarious state of the house is almost an allegory for Alex’s character: looks beautiful and feels dangerous.

The author, Cathryn Grant, did a good job. The storyline is compelling, doled out in bits and pieces. Each time you have the pieces to one puzzle, another has reared its head. Every character is a riddle you finally begin to understand as the novel progresses, even “sweet, responsible” Noreen. Behind that facade is a scary woman. The author’s voice is unique, and the narrative flows smoothly, although the switching of POV between Alexandra and Jared is occasionally jarring. But overall, it works. I had a hard time putting the book down, reading it straight through, and staying up late to finish it.

The ending is surprising, but when you look back, it fits perfectly. I highly recommend this book to readers of dark, contemporary fiction. 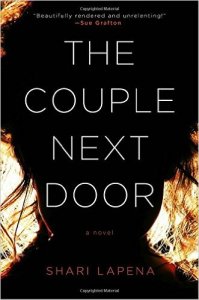 Also, recently I read Shari Lapena’s mystery thriller, The Couple Next Door. This is a tale of love, fear, greed, and secrets. Nothing is what it seems, except for the central plot point: A baby is missing from her crib.

Anne and her husband, Marco Conti have gone to a dinner party in the house next door. The sitter has cancelled at the last minute, and the hostess has insisted on an adults only party, as she doesn’t like children. Since they share a wall with these neighbors, they have brought the baby monitor with them, leaving their baby home in the row house next door.

The baby, Cora, disappears during the dinner party.

No one is free of secrets.

Rasbach is the detective, Jennings is his assistant. As the case unfolds they discover that Anne Conti’s family is more than merely rich. They are old money and secure in their sense of privilege, and her parents are quick to offer a ransom.

Little by little, evidence emerges about each character, none of it flattering. Anne herself is not without secrets.

Anne is a well-drawn character, with a mysterious history she has never fully explained to her husband. She is portrayed realistically, flaws and all. Marco is also a flawed protagonist, which makes him intriguing. This book was full of twists and turns, and the ending is a complete surprise.

And to cap off my recent completed reads was the third installment in Dean Frank Lappi’s dark fantasy Aleph Null series, Broken Numbers. Violent and graphic, this series is not for the faint of heart, as it combines elements of horror, with a magic system based on mathematics and sexual energy. After a brief prologue bringing us up to speed on the Korpor (one of the creepier beasts of dark fantasy), Lappi opens the story with our protagonist, Sid, considering his losses, the death of his mother and loss of his magic being the two worst of them.

Sid, the Aleph Null, is a deep character, a man whose life has been seriously altered by events beyond his control. He has been traumatized by incidents that occurred in his early childhood, yet he remains kind and caring of others. His former childhood friend and now leader of the Oblate, Tris, has managed to rip away the Black Numbers from Sid. It’s a partial victory, but he won’t rest until Sid is dead.

The plot is full of twists and hard-hitting. Sid is desperate to get his numbers back but knows it won’t be easy. Nothing is simple, and every step forward brings another step back. Yet through it all, his companions remain strong in their support of him. This novel also had a surprise ending, and left me jonesing for the next book!

With the new year, we have entered my favorite reading time. Something about the dark and the eternal gloom of the Northwest winter encourages escapism, and what better way than through books?

Comments Off on #amreading: cold, dark days and four books worth reading

Tagged as Andrew Wincott, Broken Numbers, Cathryn Grant, Dean Frank Lappi, Shari Lapena, Tad Williams, The Couple Next Door, The Heart of What Was Lost, The Woman in the Mirror