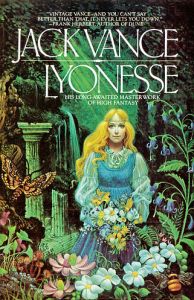 Two series of fantasy novels that had a profound effect on me as a reader are the Gormenghast series of novels, written by Mervyn Peake, and The Lyonesse Trilogy by Jack Vance. Both series are literary, yet still fantastic,

They are both considered a fantasy of manners, yet they are wildly different from each other. Both combine the comedy of manners with the hero’s journey of traditional high fantasy. Gormenghast is dark and gothic, while Lyonesse is set in an alternate Arthurian world.

The Washington Post Book World had this to say about the Gormenghast series:  “This extravagant epic about a labyrinthine castle populated with conniving Dickensian grotesques is the true fantasy classic of our time.”

The immense, labyrinthine Hayholt, featured in Tad Williams’ epic masterpiece, Memory, Sorrow, and Thorn, seemed reminiscent of castle Gormenghast to a certain extent when I first read that series. I don’t know if Williams is a Gormenghast fan–I’ve never asked him, although I should. I do know he is not afraid to write great literary fantasy.

Vance’s vision of Lyonesse has influenced fantasy literature in the most subtle of ways, creating a canon for those who write alternate Arthurian history that is nearly set in stone.

Wikipedia says, Vance builds the history of his world using layers of facts, names and religions taken from various European cultures — Greeks, Romans, Celts, pre-Carolingian French and Spanish “kingdoms” etc., and adding in places and peoples imagined by those same cultures — Atlantis, Ys, Avalon, Formor and so on. This fantastical/factual mix is used to ground his tale in “history.” It also seems to give some of the same depth that a longer series of books might develop where place, relationships, and plot are built up over time (as in Thomas Hardy’s “Wessex” or Trollope’s “Barsetshire”). It seems to provide the believability that develops where a story is set in a well-known, well-defined historical setting as if the reader holds merely a hitherto untold story.

These complicated, convoluted books are not for everyone. They are beautifully written, but the less perceptive, more impatient type of reader will find Gormenghast confusing and plot-less. Despite being a dark, Gothic fantasy, the prose is literary.

For some casual readers, both Gormenghast and Lyonesse will be considered too heavy on the descriptions.

But for those readers like me, readers who adore beautiful prose, deep, involving books, and darkly baroque settings peopled with unforgettable characters, these two watershed works strike a chord deep within the soul. 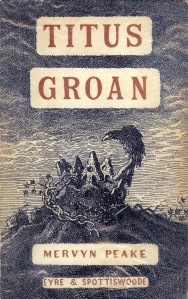 These books must be savored, experienced in the fullest sense of the word. The focus is on the breathtaking visual descriptions, and while I am thrilled by it, the verbal beauty of Mervyn Peake and Jack Vance’s prose is what will leave many impatient modern readers cold.

When you are reading these novels, the journey itself is more important than the destination. While Gormenghast is often compared to Tolkien’s work, there is little similarity between the two, other than they are both extremely well written fantasy, written by authors with a good command of the English language and all its nuances.

Literature drives changes in language and is in turn driven by changes in language. For me, Gormenghast is a surreal, visual painting, created of beautifully crafted words.  The prose of Jack Vance’s Lyonesse is equally beautiful, describing a time and place that never was but could have been.

2 responses to “#amwriting: Literature and Language: Gormenghast and Lyonesse”