One of my favorite subjects is how English is and will always be an ever-evolving and ever-disintegrating language. The history of the evolution of English is intriguing.

In recent years scholars have determined that if you want to make Shakespearean poetry  and prose rhyme, it must be read with what is now a Scottish/Appalachian accent, as that was the accent of Renaissance England, and pronounce words the way they are spelled. To hear for yourself, go out to NPR’s Shakespeare’s Accent: How Did The Bard Really Sound? I found it to be a treat.

Jonathan Swift, writer and Dean of St. Patrick’s Cathedral in Dublin, complained to the Earl of Oxford in 1712: “Our Language is extremely imperfect. Its daily Improvements are by no means in proportion to its daily Corruptions; and the Pretenders to polish and refine it, have chiefly multiplied Abuses and Absurdities.” He went so far as to say, “In many Instances, it offends against every Part of Grammar.”

It was the linguistic wild-west, undisciplined and out of control. Slang words willfully forced their way into drawing rooms, newspapers, and books, and in the process they became part of our common usage. So, in an effort to tame our wildly evolving language, a group of clerks and clerics in the eighteenth century who wanted a more orderly language developed the rules for the “Queen’s English.”

Unfortunately, they used the rules with which they were most familiar. Being men of the church, they borrowed them from Latin. This poor choice on their part is the source of much of our grammatical dysfunction.  These men applied the rules of a dead language, Latin, to an evolving language with completely different roots, Frisian, added a bunch of mish-mash words and usages invented by William Shakespeare, and called it “Grammar.”

Despite their origin, the rules have been consecrated, hallowed, and immortalized in hundreds of books on style, and repeated by scholars who ignore the scabrous history of our English language. Frisian evolved into Modern Dutch, and Latin evolved into Modern Italian, Spanish, French, Romanian—and several other modern languages. Yet, despite the wide linguistic differences in the two root languages, these hard-and-fast rules have been passed down by generations of schoolteachers in a vain effort to teach students how to write and speak our common language.

These rules of grammar are what we also refer to as style.

When we leave school and first begin to write seriously, we soon discover that we don’t really know how to construct a narrative that people would want to read. So, we need to further educate ourselves.

Despite the pox-ridden history of the English language, it helps to have a framework to go by when writing. I use a book of rules, the Chicago Manual of Style.  This book is used in the big publishing houses here in the US and is the manual of choice for most American editors of fiction and literary works. Referring to it when I have a question helps me to remain consistent in my punctuation, and ensures my personal style is comfortable for the reader.

You can use any style guide you choose, but you must remain consistent. Refer to your guide of choice whenever you are confused about punctuation or grammar. This isn’t a cure-all for bad writing. Many times, confusion can only be eliminated by rephrasing, deleting excessive descriptors, and by cutting long, compound sentences in half.

Knowledge of grammar is no substitute for talent, but it can help make talent readable.

If you are in the UK, you might want to invest in the New Oxford Style Manual.

If you are writing technical manuals, the Microsoft Manual of Style for Technical Publications would be a good investment for you.

If you are a journalism major, you may think Associated Press Style is the only style guide you’ll ever need, but you would be wrong. AP Style evolved for the printer setters in the newspaper industry and is intended to make the most efficient use of space in a column. It is not favored by the large traditional publishers and editors as the style guide for novels or short stories, which have different requirements.

For a good post on the major differences in these two very different American English styles, see this blog post written in 2016 by Acadia Otlowski for Hip B2B:

AP vs Chicago Manual of Style: Which Stylebook is Right for You?

I’ve seen AP and Chicago Manual users in hair-pulling matches over the Oxford comma, on-line disputes that were both embarrassing and needlessly troll-ish.

Regardless of your personal writing style, it’s a good idea to learn how to write and speak in your native language, as readers will be able to accept your personal style choices more easily if the larger elements flow as expected.

And that is the key word: expected.

We all habitually write in such a way that we consistently break certain rules. This is our voice and is our fingerprint. This does not mean you should throw grammar out the window—readers have expectations that authors will respect them enough to spell words properly, will understand the words they are using and use them correctly, and will insert pauses between certain clauses.

They don’t demand perfection, but they do want consistency.

A rudimentary knowledge of how your native language works is essential, so my advice is for you to invest in a few reference books and use them. Listed below are my go-to books. 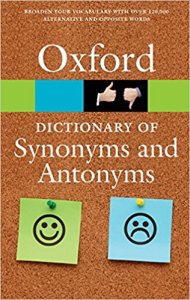 If you are writing novels or fiction in the US, a handy book for you would be The Chicago Guide to Usage and Grammar by Bryan A. Garner. It is a more concise and to the point compilation of the important things than the big blue book that is the Chicago Manual of Style.

If you are in the UK, you should invest in The Oxford A – Z of Grammar and Punctuation by John Seely. I use this little guide when I am editing for my British clients.

A handy book for all who write in the many multi-national English dialects is The Oxford Dictionary of Synonyms and Antonyms – I find this book invaluable when I am stuck trying to think up an alternative word that won’t be awkward or pretentious.

I secretly love awkward and pretentious words, especially ones that rhyme. It embarrasses my children when I forget my manners and use them in public.

Quote from: A Proposal for Correcting, Improving and Ascertaining the English Tongue by Jonathan Swift, 1712, 2nd ed. Edited by Jack Lynch, Professor and chair of the English Department in the Newark College of Arts & Sciences at Rutgers University – Newark. (accessed Aug. 12, 2018).