The key to making both fiction and nonfiction real for the reader is subtle but crucial: world building. Maps, no matter how rudimentary, are the foundation of world building in my writing process.

The first map of what eventually became my world of Neveyah series emerged from a conversation with a game designer and was scribbled on a piece of note paper in a Starbucks. I transferred the scribble to graph paper, and over time, that map grew, evolving into a full color relief map of the world as it exists in my mind.

I love maps. Since that early scribble, my maps all start out in a rudimentary form, just a way to keep my work straight. I use pencil and graph paper at this stage, because as the manuscript evolves, sometimes towns must be renamed. They may have to be moved to more logical places. Whole mountain ranges may have to be moved or reshaped so that forests and savannas will appear where they are supposed to be in the story.

And that tendency for embellishment and evolution in the story teller’s mind is what has led to my most embarrassing moment of the week. 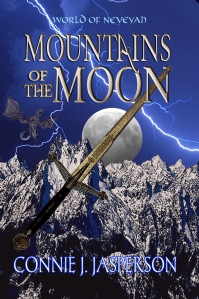 I went back to the original manuscript of Mountains of the Moon, Wynn Farmer’s story, just to check on how I had described the terrain of the high country of the Escarpment, as I am writing a short story set there. While I was searching for the passage I wanted, I noticed that I had described Widge as the northernmost navigable port on the River Fleet.

Which means that Dervy can’t be the northernmost port, and the novel I am not working on for the duration of NaNoWriMo has a large plot-hole that won’t be fixed until December.

Fortunately, it is set five hundred years before Wynn’s time, so I’m not going to scrap that portion.

Instead, I made a series of notes for when I get back to writing that novel after NaNoWriMo is over. I will show how at that time, Dervy had some commerce via flat-bottomed barges owned by daring traders. The courses of rivers are changeable, like the Mississippi or the Nile. Where a harbor was possible three hundred years ago, it may not be possible now. (see How The Nile Has Changed Course Over The Past 5,000 Years.)

So, I just had a sharp reminder to check my work for inconsistencies while I still have the chance to either make them possible or remove them.

Perhaps you think you don’t need a map. You aren’t writing fantasy, so the real world is your setting. If your characters are traveling and you are writing about their travels, you want to be accurate. Google earth and a good map will help, as will timetables for trains and airlines.

In my books, people are going hither and yon with great abandon, and if I am not really on top of it, the names of towns will evolve throughout the novel. 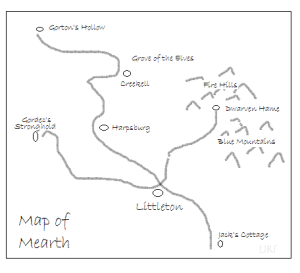 The basic pencil-drawn map, in conjunction with my style-sheet, is my indispensable tool for keeping the story straight. I just have to keep referring back to them, rather than trying to keep it all in my head.

What is a style-sheet? When a manuscript comes across their desk, editors and publishers create a list of names, places, created words, and other things that may be repeated and that pertain only to that manuscript. This is called a style-sheet.

The style-sheet can take several forms. It’s a visual guide to print out or keep minimized until it’s needed. I copy and paste every new word or name onto my list, doing this the first time they appear in the manuscript. If I am conscientious about this, I’ll be less likely to inadvertently contradict myself later on in the tale. I also do this for my clients when I edit a manuscript.

Some people use Scrivener. I prefer to keep it simple, so I just use Excel for this because I like keeping my maps and the glossary in the same workbook. Google Docs works just as well, and it’s free, or you can just keep a list on a document or notepad.

Regardless of how you create your style-sheet, I suggest you include these elements:

What should go on a map? When your characters are traveling great distances, certain differences in the terrain will impede your characters. If they are pertinent to the story, you will want to note:

What if your setting is indoors, such as an office, a mansion, or a hotel? You want to make sure the rooms and corridors that get mentioned in the narrative aren’t described in a contradictory way. If a room is next to the kitchen in the opening scene, it should still be there at the end of the story, barring a tornado.

Billy Ninefingers is set in a wayside inn. I made a drawing of the floor plan for my purposes because the inn is the world in which the story takes place. If you are writing a space opera, map out your ship or station, just for yourself.

As a side note, if you are writing fantasy, I suggest you keep the actual distances mushy because some readers will nitpick the details, no matter how accurate you are.

From Wikipedia, the fount of all knowledge: “A league is a unit of length (or, in various regions, area). It was long common in Europe and Latin America, but it is no longer an official unit in any nation. The word originally meant the distance a person could walk in an hour.[1] Since the Middle Ages, many values have been specified in several countries.”

Therefore, a league is what you say it is, within some loose parameters. I go with the distance you can walk in an hour, which means you must take the terrain into consideration. In my current work, I don’t even mention distance by measure. Instead, I use time—they travel for an hour, or day, or two days. 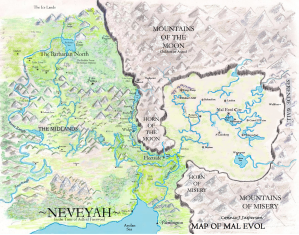 Not everyone is an artist. Perhaps your work is set in a fantasy world, but you feel your hand-drawn map isn’t good enough to include in the finished product.

One option is to go to a game designer’s map generating site, play around with it until you find a map you like, then write the story to that map. Another option indie authors might consider is hiring an artist to make a map from their notes.

I’m fortunate to have some skill as an artist, so my pencil-drawn map always evolves into artwork for the book.