#FineArtFriday: The Drunkard by Marc Chagall 1911 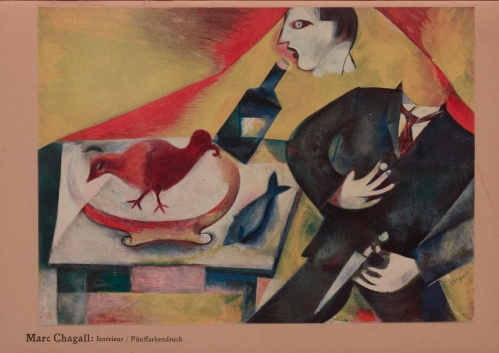 In this image, Marc Chagall manages to capture the determined self destruction of the addict. His colors are vivid, intense, and the images slightly shocking. The addict has lost his head.

About the Artist via Wikipedia Commons:

Art critic Robert Hughes referred to Chagall as “the quintessential Jewish artist of the twentieth century” (though Chagall saw his work as “not the dream of one people but of all humanity”). According to art historian Michael J. Lewis, Chagall was considered to be “the last survivor of the first generation of European modernists”.

Author Serena Davies writes that “By the time he died in France in 1985—the last surviving master of European modernism, outliving Joan Miró by two years—he had experienced at first hand the high hopes and crushing disappointments of the Russian revolution, and had witnessed the end of the Pale of Settlement, the near annihilation of European Jewry, and the obliteration of Vitebsk, his home town, where only 118 of a population of 240,000 survived the Second World War.”

Comments Off on #FineArtFriday: The Drunkard by Marc Chagall 1911