A screaming black arrow knocks down yet another attacker. [1]

The narrative is written in an unusual mode, one this particular author, L.E. Modesitt Jr., uses in many of his books: Third person present tense. I have read this book several times, and there are several proofing errors, but that line in the final battle has always tripped my eye.

It’s a “first draft” telling line, a signal to the author indicating an intensity of emotion he wanted to convey in a ship-to-ship battle. I suspect he was in the zone and writing as quickly as he could. The many proofing errors in this book, much as I love it, told me that editors, even those working for a publishing giant like Tor, are fallible human beings. When an author is pushed to become a book producing machine, proofing and editing can suffer.

So how could we write a scene about a hazardous inanimate object and convey a sense of imminent danger without resorting to words that don’t quite fit? First, we must understand that these are the places where getting the prose right takes time, and sometimes, many attempts.

In a conversation, it’s easy to convey a sense of fear and peril. Danger seen through a character’s eyes is easily done—describe the shock and gut reactions and move on.

Danger described from an outside view (third person) is more difficult. In a fight or battle, sounds, visuals, and smells must be employed.

And this is where it gets tricky: for me as a reader, the best fight or battle scenes have both personal witness and third person narrative.

Hollywood has been quite good at portraying battle scenes with some degree of accuracy, although not always. In the movies, arrows arc, rain down and sometimes flash. They whiz past, and sometimes they appear in the victim’s back, seemingly out of nowhere. In the movies, they travel slowly.

But, in real life the arrow strikes the target nearly immediately after leaving the bow, even at a longer distance. An arrow is not as fast as a bullet, but they are fast.

My friend Michael, who is an archer, tells me that arrows, both ancient and modern, do make a sound, depending on how they are fletched (the feathers). The hissing sound as it passes the human ear varies from nearly inaudible to soft, depending on who fletched them and what style of fletching they used.

What you will hear is the snapping sound the bow makes when the archer lets the arrow fly, followed closely by the sound the arrow makes when striking a hard target. An arrow striking a soft target like a human or animal would make a sickening sound, but one that is not loud.

In my opinion, screaming is the wrong sound for arrows.

But it is an appropriate sound for the victim that was shot by the arrow.

There must be a certain amount of telling. What is the balance between telling and showing?

In describing, we must choose our words carefully. Examine the logic of your descriptions. How do we both show and tell in a balanced way?

In War and Peace, Tolstoy conveyed the feeling of each cannon ball hitting the ground and exploding, without resorting to clichés and awkward descriptors. Andrew Kaufman is the author of Understanding Tolstoy and Give War And Peace A Chance says:

“You see, hear, and feel everything in Tolstoy’s world: glistening sunrises, whining cannonballs, exhilarating troika races, glorious births, brutal deaths, and everything in between.” [2] 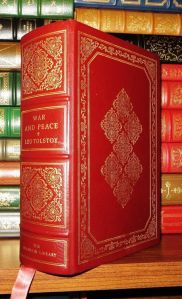 Good, immersive prose requires showing in such a way that the reader isn’t blown out of the scene. This means a small amount of telling is required. For that, we’ll go to Tolstoy’s War and Peace again. This quote, written in the same third person present tense as Modesitt’s quote, is an observation, a way of both telling and showing the reader what is goes on in the subconscious mind.

“When a man sees a dying animal, horror comes over him: that which he himself is, his essence, is obviously being annihilated before his eyes — is ceasing to be.” [3]

In that one sentence, Tolstoy shows us that in Napoleon’s time, soldiers weren’t the only casualties of war. A cavalry is made up of soldiers on horses. This means that living animals went to battle and were killed too.

Tolstoy gives us the visceral experience of witnessing a horse’s death but allows us to contemplate what death means on a human level. He uses powerful words that evoke deep emotion: dying, horror, essence, annihilated.

Witnessing the death of a horse brings us closer to understanding how frail a soldier’s grasp on life is when in the midst of a battle.

Modern writers would cut the words obviously being, but despite having been written 160 years ago, the sentence has power.

Word choices are especially important in action adventures. Strong, powerful words can make or break a sentence. To revise properly, we must step back from the manuscript for several days or even weeks.

Then we come back to the manuscript and consider the visual logic of our descriptions.

We move verbs to the front of sentences, placing them before the nouns so that most sentences lead off with action words.

In the second draft, we eliminate the many insidious forms of was and to be. They’re insidious because they’re signals to the author, saying that something needs to be made active. But they can slide under the radar in the editing process and end up in the final product.

It takes work and perseverance, to find the words that correctly evoke the emotions we want to convey.

But that is what good writing is about.

[1] Quote from The Magic Engineer, by L.E. Modesitt Jr., 1994; A Tor Book, Published by Tom Doherty and Associates, LLC. Fair Use.

[2] Quote from Andrew Kaufman, The Only Classic Needed for Modern Times © 2014 Off the Shelf, Simon and Schuster, Inc. Fair Use.

[3] Quote from War and Peace by Leo Tolstoy, PD|100. First published by The Russian Messenger (serial).