his last week I managed to get quite a lot of writing done—just not on the projects I had planned. I seem to be more in short story mode right now.

I had an idea for a short fantasy involving Gods and mortals, and that one is finished.

Then I had an idea for a post-apocalyptic tale of madness and murder, which is about halfway to the conclusion.

I am still reworking and rewriting the first draft of a novel set in my Tower of Bones world whenever I have a flash of brilliance.

Also, I am still working on devising a shocking-but-logical finale for my alternate Arthurian novel, Bleakbourne on Heath.

Many of you know that Bleakbourne began life in serialized form in 2015 on a now-defunct site called Edgewise Words Inn. It was written and published one episode a week.  I began with writing and publishing the first chapter only, and no idea where it was going to go after that.

It was a challenge, writing it in serial form and trying to turn out one installment a week.

At first, it all went well. However, at what would be the midpoint of the novel, the well of creativity ran dry. I had no clue as to what to do next. When that happened, once a week became twice a month.

I managed to squeeze four more installments out and then couldn’t think of how to write the final stand against Evil. On my writing group’s advice, I ended the serial on a happy note with a wedding but left a major thread dangling.

Cliffhanger endings aggravate readers who don’t want to wait a year for the rest of the story. I had to give my readers a reward for their faithfulness, and resolve most of the subplots. This is why I wound up most of the side threads and ended the Bleakbourne serial with a wedding.

This last December, I went back to edit and flesh out the first chapters and add a few that weren’t included in the original serial. In that process, I discovered that my subconscious mind had left several important clues that point me in the direction for the final confrontation.

I need to do some serious mind-wandering, and let this magic-flinging shindig roll around in my head a bit before I can write it.

Writing Bleakbourne as a serial and publishing it almost as soon as it left my head was a good experience. I had great input from readers, which was something I hadn’t expected.

It was also terribly difficult to keep on task and meet the publishing deadline. Making each installment readable took up far more time than I expected it would. I had no time to write anything else.

I discovered that, while I can write quickly if I have to, I don’t write well under the pressure of a weekly deadline.

For me, writing good endings is the most difficult part of writing. And in Bleakbourne,  so many possibilities presented themselves that I had no idea which way to end that unwieldy, complicated storyline. 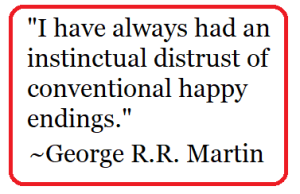 That experience reinforced my need to write from an outline as a way of not getting stuck without a good finish. I may not stick to the outline but having a list of ideas gives me a jumping off point. Even with an outline I struggle to make every story’s finish logical, yet unexpected and memorable.

The final cataclysmic event must be a powerful emotional thing for the reader. Therefore, I have gone back and put more pressure on Merlin and Leryn in the earlier chapters.

The higher the emotional stakes when they meet Mordred for the final showdown, the more emotionally satisfying the final resolution will be for the reader.

This resolution will be final, with no loose threads.

Tagged as My Writing Process, writing, writing the end of a story

2 responses to “My writing life: magic and mayhem #amwriting”