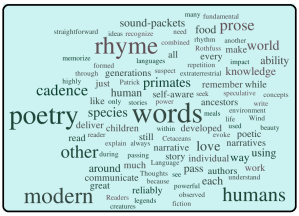 Poetry comes in many forms. In fact, Writer’s Digest University lists 100 of them: List of 100 Poetic Forms for Poets.

However enticing that rabbit trail may be, today’s post will cover only a few of the most common and well-known forms. The rhyming scheme of poetry is traditionally shown by using the first letters of the alphabet, such as: AABB

Another word to know is what we call a stanza, or how we divide our poem. Literary Devices says: In poetry, a stanza is a division of four or more lines having a fixed length, meter, or rhyming scheme.

A few of the most common poetic forms are:

Elegy  – a poem or song written to honor the life of someone deceased, such as W. H. Auden’s In Memory of W. B. Yeats, the opening lines which follow:

He disappeared in the dead of winter:

The brooks were frozen, the airports almost deserted,

And snow disfigured the public statues;

The mercury sank in the mouth of the dying day,

What instruments we have agree

The day of his death was a cold dark day.

Epitaphs – poetic writings on tombstones, such as William Butler Yeats’ epitaph, taken from his poem, Under Ben Bulben:

On Life, on Death.

I write one Haiku

Five over seven and five

Into space that is quite economical.

But the good ones I’ve seen

So seldom are clean

And the clean ones so seldom are comical.

Odes are poetry that praise a person or an ideal, such as this excerpt from Wordsworth’s Intimations of Immortality:

By night or day,

Our birth is but a sleep and a forgetting:

The Soul that rises with us, our life’s Star,

Hath had elsewhere its setting,

And cometh from afar:

Not in entire forgetfulness,

And not in utter nakedness,

But trailing clouds of glory do we come

From God, who is our home…

Prose poetry is written in prose form instead of verse form without the line breaks associated with poetry. However, it contains the imagery and makes use of rhyme, repetition, fragmentation (short sentences), and most other poetic devices.

Quatrain. A complete poem consisting of four lines. There are fifteen possible rhyme patterns, but the most traditional and common are: AAAA, ABAB, and ABBA. Thomas Gray’s Elegy Written in a Country Churchyard is ABAB:

The curfew tolls the knell of parting day,

And leaves the world to darkness and to me.

“There are several variations of the rondel, and some inconsistencies. For example, sometimes only the first line of the poem is repeated at the end, or the second refrain may return at the end of the last stanza.  Henry Austin Dobson provides the following example of a rondel:

Love comes back to his vacant dwelling,

The old, old Love that we knew of yore!

We see him stand by the open door,

With his great eyes sad, and his bosom swelling.

He makes as though in our arms repelling

He fain would lie as he lay before;

Love comes back to his vacant dwelling,

The old, old Love that we knew of yore!

Ah! who shall help us from over-spelling

E’en as we doubt, in our hearts once more,

With a rush of tears to our eyelids welling,

Love comes back to his vacant dwelling.

The last form I’m going to show you is the Sonnet, which was a favorite medium for William Shakespeare.

Wikipedia says: The Petrarchan sonnet is a sonnet form not developed by Petrarch himself, but rather by a string of Renaissance poets. Because of the structure of Italian, the rhyme scheme of the Petrarchan sonnet is more easily fulfilled in that language than in English. The original Italian sonnet form divides the poem’s fourteen lines into two parts, the first part being an octave and the second being a sestet.

On His Blindness by the English poet Milton, gives a sense of the Petrarchan rhyme scheme:

When I consider how my light is spent (A)

Ere half my days, in this dark world and wide, (B)

And that one talent which is death to hide, (B)

Lodged with me useless, though my soul more bent (A)

To serve therewith my Maker, and present (A)

I fondly ask; but Patience to prevent (A)

Either man’s work or his own gifts; who best (D)

Bear his mild yoke, they serve him best. His state (E)

Is Kingly. Thousands at his bidding speed (C)

And post o’er land and ocean without rest; (D)

They also serve who only stand and wait.” (E)

I have experimented with writing in all of these forms, but I tend to lean most toward a kind of free verse or prose poem. On Wednesday, I will feature an interview with my good friend, Stephen Swartz. He writes novels and short stories in a wide variety of genres and often leaves comments for me in the form of silly rhymes.

Silliness aside, Stephen has been known to produce some beautiful prose poems and is always willing to talk about the craft.