Mood and atmosphere exist in the inferential layer of the story. They are two separate but entwined forces that form subliminal impressions in the awareness of the reader. Where you find atmosphere in the setting, you also find mood in the characters. 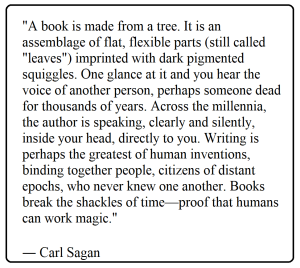 What is the interpretive aspect of this layer? The author’s job is to deploy inference in such a way that the reader can interpret their intention. That is, they can effortlessly understand where the author was going with that thought.

The aspects we call mood and atmosphere are created by inference, a word-picture that is shown rather than bluntly stated. Writers infer, readers interpret.

Books have two authors. The first author is obviously the writer.

The second author is intangible, a ghost, and doesn’t influence the story until after it is published. It is the intended reader whose imagination will recreate the story as they read the words on the page.

How a reader feels the emotion and absorbs the atmosphere is the interpretive layer.

Emotion is a constant force in our lives. On the page, it must be truthful, or it becomes maudlin. A character’s mood is an emotional backdrop that begins with their experiences. It encompasses the reader as they immerse themselves in a story.

The way emotional inference is conveyed on the page determines the success or failure of the author’s intention.

Let’s explore one of the all-time masterpieces of atmosphere and mood: Wuthering Heights, the 1847 gothic novel by Emily Brontë.

The word Gothic in a novel’s description immediately tells us we are looking at a dark, moody piece set in a stark, desolate environment, and it will include some supernatural elements. In classic Gothic novels, these elements are circumstantial and often later proven to be figments of the protagonist’s mind.

Also, the word Gothic in a novel description means a story will be fraught with emotion and intensity, and take place in a dark, forbidding setting.

The general mood is heavily influenced by other aspects of the narrative: setting, theme, ambiance, and phrasing. These form the inferential layer.

A reader’s perception of a setting’s atmosphere is affected by a character’s emotions. Emotion, as written on the page, is the character’s experience of transitioning from the negative to the positive and back again.  As the characters’ emotions change from high to low throughout the story, the overall mood is influenced.

This is because the reader has suffered through emotions in real life and can easily recognize and relate to a character’s experience.

Consequently, for the atmosphere and mood of a setting to affect the reader’s interpretation of a story, the author must convey a sense of familiarity to a place the reader has never been.

“Familiar” does not mean safe or comforting. It means the elements of the environment are recognizable on a subliminal level, something the reader can understand without having experienced it, or being bluntly told.

In this layer, visual objects in a room or an outdoor space color the atmosphere and affect the characters’ moods. Gothic atmosphere has a winter feel to it even in summer.

Barren landscapes and low windswept hills feel gothic to me.

The atmosphere/mood dynamic of any narrative is there to make the emotional experience of the story specific. The atmosphere of a setting is not a substitute for emotions that an author can’t figure out how to write.

However, creating the right atmosphere leads to shaping the characters’ overall mood, and the right mood can help you articulate the specific emotions.

In Wuthering Heights, the atmosphere contributes to and magnifies certain characters’ obsessions. It lays bare hate, selfishness, and revenge. These elements are demonstrated in the course of exploring the destructive power of obsession and fixated, unchanging love.

The Gothic aspects of Wuthering Heights expose how upper-class Victorians benefitted from and perpetuated gender inequality within their society. 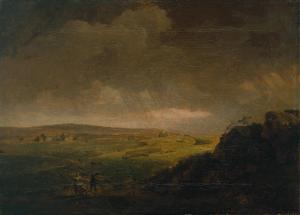 Environmental symbols are subliminal landmarks for the reader. In Wuthering Heights, the landscape is comprised primarily of moors. These desolate places are wild and starkly beautiful. They are vast expanses, which although high in elevation, are dangerously boggy. These moorlands are often made of peat, a high-carbon-content muck composed of decomposing vegetation.

About Dartmoor, via Wikipedia:

Much more rain falls on Dartmoor than in the surrounding lowlands. As much of the national park is covered in thick layers of peat (decaying vegetation), the rain is usually absorbed quickly and distributed slowly, so the moor is rarely dry. In areas where water accumulates, dangerous bogs or mires can result. Some of these, topped with bright green moss, are known to locals as “feather beds” or “quakers” because they can shift (or ‘quake’) beneath a person’s feet. Quakers result from sphagnum moss growing over the water that accumulates in the hollows in the granite. [1]

Historically, we find many accounts of people drowning in bogs. Moorlands, as a setting for a novel, present a recognizable danger. People and animals are known to stumble into waterlogged places and drown. Becoming lost and drowning is a possibility that is raised several times throughout the novel.

Thus, the environment of the moors sets the mood by raising the specter of murderous, untamed nature. Setting the story in that environment immediately implies infertility and death.

Another aspect of this setting that contributes to the atmosphere is graphic: Moorland is visually the same wherever you look, so the lack of visible landmarks makes it easy to lose your way. In this novel, the setting conveys a powerful emotion: the fear of being both lost and trapped.

Most of the action occurs at Wuthering Heights, which is the manor from which the novel takes its name. The neighboring house, where other scenes are set, is Thrushcross Grange. They are neighbors, but a vast stretch of moorland lies between the two houses. These houses are far from neighboring towns, in their words, “far from the stir of society.” Distance emphasizes the loneliness of the setting.

Thinking about and planning symbolism in an environment is key to developing the general atmosphere and affecting the mood. Brontë made each house symbolic of its inhabitants.

Those who reside at Wuthering Heights tend to be intense, wild, and passionate—untamed like the moorlands.

Conversely, the characters living at Thrushcross Grange are closer to town, and are passive, civilized, and calm.

That underlying threat of danger in the environment affects the mood and emotions of the characters. It affects the overall atmosphere of the novel.

Thus, before we are even introduced to the characters’ motives or the plot, we find that the mood/atmosphere of Wuthering Heights is dark and gothic.

And so, to wind this up, atmosphere and mood are intertwined. They are fundamental aspects of the inferential and interpretive layers of the story and getting them right takes a bit of work.

But making the effort can result in a novel that is deep and well worth reading.

6 responses to “Mood and Atmosphere: Where Inference meets Interpretation #amwriting”