The basic premise of any story I want to write can be explained by answering eight questions. Each answer is simply one or two lines, guideposts for when I draft the outline.

A plot idea I’ve used before as an example is an idea I’ve had rolling around for a while. I hope to write it as a novella (about 12,000 words) in November. This little tale features a pair of thieves-for-hire, set in an alternate renaissance reality.

At the beginning of the story, what does our protagonist want that causes them to risk everything to acquire it? How badly do they want it, and why? The answer to that question must be that they want whatever it is desperately.

Question number six is an important question to consider. What ethical dilemma will the protagonist be faced with in their attempt to overcome the odds and achieve their objective?

In this story, one hard moral choice I could write would be to have Scuttle pressured to become a spy for the Cardinal.

Or, he could be pressured to sell out Pip.

How would he respond to either of these situations? I could write both and choose the one that works best. If I do that, I’ll make a note of the divergent path on my outline.

The answer to question number seven is vitally important because the story hinges on how the protagonist overcomes adversity. What hinders them? Is there an antagonist? If so, who are they, and why are they the villain of the piece?

“There has to be evil so that good can prove its purity above it.” The Buddha said it, but it’s a fundamental truth we writers of genre fantasy must consider when devising plots. J.R.R. Tolkien understood this need for a hero quite clearly.

Answering question eight is crucial if I want to have a complete novel with a beginning, middle, and end.

Endings are hard and complicated to write because I can see so many different outcomes. I write as many endings as I need to and save them in separate files. 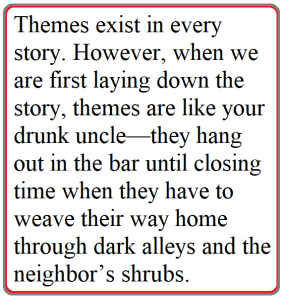 Sometimes, even if we have plotted in advance, we can’t identify the central theme of the story. Theme is what the story is about on a deeper level than what is seen on the surface. It’s the big meaning, a thread that is woven through the entire story, and sometimes it is an unstated moral for the reader to infer.

Regardless of the theme, the struggle must be personal. Why would Frodo and Sam go to the depths of Mordor and suffer the hardships they endured in their effort to destroy the One Ring and negate the power of Sauron?

Frodo and Sam saved the world because it was the only way to save The Shire and the people they loved from Sauron, who was the embodiment of evil.

No matter how careful I am when building my outline, there is always a point where I am writing by the seat of my pants. I am usually a linear plotter, but things come along that change the direction a tale goes in.

This is where making use of scene breaks can be your friend. In the NaNoWriMo manuscript, I simply head that section (in bolded font) with the words Possible Ending 1 or 2, or however many endings I have come up with.

No matter if you are writing a NaNoWriMo novel or not, your finished novel will look vastly different from the block of stone you carved it from. Yet, it will be the core of the stone, the hidden story that was waiting for you to bring it to light.

Many times, I find myself re-evaluating a nearly complete manuscript because the story isn’t working. I go back and ask myself the same eight questions. If the story has gone in a new direction by midpoint, a different roadmap to the final scene can help you keep things logical.

However, a plot is just the frame upon which the themes of a story are supported. Knowing the main theme at the outset makes writing the first draft much easier.

When your writing mind has temporarily lost its momentum, and you are stretching the boundaries of common sense, it’s time to stop and consider the central themes. It helps to remind myself of the elements that really drive a plot.

Subthemes help keep the story interesting. The image at the bottom of this post is a visual tool, a circular list of themes and subthemes that I made a few years ago.

It’s a picture that you can save (right click>save as>png or jpeg) print out and tape to your desk. Whenever you have lost your way, rather than resort to a sudden influx of something far-fetched, feel free to refer back to this picture and see if a better idea presents itself.

Hopefully, you won’t have to resort to killing anyone you might need later.

Tagged as #writetip, how to develop a plot for a story, identifying theme, outlining your plot, theme, writing

7 responses to “Plot and Theme #amwriting”