Composition is defined as the way the elements inside a frame are exhibited to the viewer – the layout of a picture. In the second draft of a novel or story, you must consider what to show and how to arrange the visuals to achieve the best effect. The environment (world) against which the events and actions are shown is the frame that enhances the scene.

Each chapter is comprised of one or more scenes. These scenes have an arc to them: action and reaction. These arcs of action and reaction begin at point A and end at point B. Each launching point will land on a slightly higher point of the story arc.

Each scene occurs within the framework of the environment, which must be shaped to emphasize the emotion of the narrative. This is called scene framing.

Our written narrative is the camera through which the scene is viewed.

We want the characters’ interactions to convey the most emotional impact. Also, we want to keep the wordiness to a minimum. We supplement our descriptions by using the environment to highlight the characters’ moods and darken or lighten the atmosphere.

When you target the focus of the scenery to frame the action, you draw attention to the subtext you want to convey, beneath and around the ruminations and conversations.

Today’s example is taken from Anne McCaffrey’s 1988 novel, Dragonsdawn. The Dragonriders of Pern series is recognized as science fiction because of its knowledge of the nature of the star Rukbat and its planetary system. Many elements in the earlier books are primarily fantasy in origin as they deal with dragons and telepathy.

However, the early novels also detail the gradual rediscovery of lost technology, the revelation of their forgotten history. Dragonsdawn reinforces the science fiction nature of the series by explaining the science behind McCaffrey’s dragons and why they were genetically engineered to be what they are.

The story follows several POV characters, giving us a comprehensive view of the colony’s successes and failures. For the first ten years, the planet Pern seems a paradise to its new colonists, who are seeking to return to a less technologically centered, agrarian-based way of life. They believe Pern is the place where they can leave their recent wars and troubles behind.

A decade after arriving on the planet, however, a new threat appears. It is a deadly, unstoppable spore that periodically rains from the skies in the form of a silvery Thread that mindlessly devours every carbon-based thing it touches. 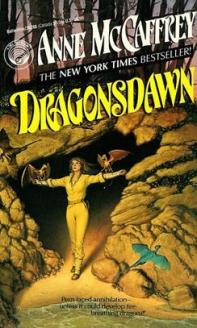 he scenes we are looking at today have two distinct environments to frame them: first the planet and then the abandoned colony ship, Yokohama. These scenes are filled with emotion, high stakes, and rising dread for the sure and inevitable tragedy that we hope will be averted. Not all the drama is in Sallah Telgar’s direct interaction with Avril Bitra. The environment heightens the drama, the sense of impending doom.

Before the advent of Thread, Avril disappeared, gathering resources and intending to leave the planet with as much treasure as she can carry. She has been pretty much forgotten by the others but has an agenda and refuses to be thwarted.

In the first scene of this chapter, we see Sallah on her way to work, leaving her children at the daycare. We zoom out and see Kenjo, the pilot, putting the last of the precious fuel into the only working shuttle, the Mariposa. This shuttle has been refitted for one last science expedition: to discover the source of the Deadly threads that rain down upon the planet periodically and to retrieve a sample. If this mission fails, there will be no other.

The camera moves out, and we see Sallah as she observes a woman she recognizes as Avril Bitra slipping through the abandoned shuttles on the landing grid. The view widens again as we see Avril following the pilot, Kenjo, who vanishes. We then see her entering the Mariposa alone.

Sallah makes a spur-of-the-moment decision to follow her, to see what Avril is up to.

Here is where the sparse visual mentions of the environment become crucial as they emphasize the stark reality of Sallah’s situation. Sallah enters the shuttle just as the airlock door closes, catching and crushing her heel. She manages to pull it out so that she isn’t trapped, but she is severely injured. Later, the dark, abandoned interior of the Yokohama reinforces Sallah’s gut-wrenching realization that her five children will grow up without a mother.

Subtext is the hidden story, the hints and allegations, the secret reasoning. It’s the images we see of the environment and how it affects the atmosphere. Subtext is the content that supports the dialogue and gives purpose to the personal events.

Scene framing is the way we stage the people and visual objects. What furnishings, sounds, and odors are the visual necessities for that scene?

Whatever you mention of the environment focuses the reader’s attention when the characters enter the frame and affects the reader’s interpretation of a scene. In this chapter of Dragonsdawn, we see the junk and scrap on the grid and the decaying shuttles. Two shuttles have been dismantled and parted out and used to keep the few cargo sleds they have converted to Thread-fighting gunships in working order. One shuttle remains in usable condition.

Sensory details are important, showing how the environment affects or is affected by the characters. Conversely, not mentioning the scenery during a conversation brings the camera in for a closeup, focusing solely on the speaker or thinker.

A balance must be struck in how your characters are framed in each scene. We flow from wide-angle, seeing Salla floating in freefall, blood pooling in her boot. The camera moves in to closer up, showing Avril’s rage at the fact that she can’t control the course of the Mariposa, which is programmed to dock at the Yokohama.

We see Avril taunting Sallah for her matronly body and move out again to see Avril tying a cord to Sallah’s crushed foot and forcing her to make the navigational calculations for Avril’s escape. We move close up and hear the interaction, Sallah pretending to do as Avril asks but really setting her enemy’s doom in action. The camera moves to the wide view again, and we hear the interaction with her frantic husband on the ground. We are caught up in her determination to seize this only chance, using her dying breaths to get the information about the thread spores to the scientists on the ground.

Atmospheric Mood: Ask yourself why you have placed those things in that scene. Why are they important, and what are you conveying to the reader with that visual composition? What subliminal elements does the environment contain that clue the reader into the deeper emotions in that scene? What subtext will carry over from this scene to the next?

Scene framing is the way you compose the scene. How you use the setting to place your characters supports and reinforces the subtext of the conversations and events and is what makes a scene feel powerful.