#FlashFictionFriday: Cats and the Laws of Physics 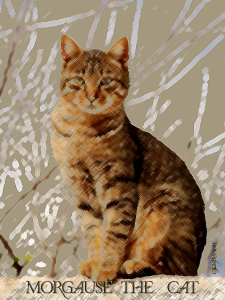 Today I am reprising a piece from May 2014, a  flash fiction containing a hairball of truth. Enjoy!

I realized the other day that I am a cat lady. Oh, I don’t own a cat or even a dog for that matter, but I am still a cat lady.  I love cats… ceramic cats. I have 3 of them.

They are the perfect companions. Their demeanor is a little aloof, but what do you expect from a cat?  They rarely meow, eat very little, require only an occasional dusting, and never try to hijack my laptop.

I’ve never yet had to clean up a hairball.

That said, there is something lacking in my relationship with these strangely well-behaved creatures.

Alas, I am a lazy woman. The amount of vacuuming a living cat introduces into my life breaks the laws of physics. Let’s do the math–I’m an author, so we’ll do it with a story-problem:

Mr. & Mrs. Catpeople are humans who currently have 0 cats. They are ordinary people, not too messy, and not too tidy. Normally, they only have to vacuum their bungalow once a week. One spring day Mrs. Catpeople loses her suburban mind and decides to bring home a cat. If she only had to vacuum the house 1 time a week when two humans resided in her home, how many times will she vacuum with the addition of a cat?

Okay… 2 people + 1 cat = 3 creatures.  So, if she cleans once a week when there are 2 creatures in the house, with the addition of a third creature, and assuming you can’t half-vacuum (although you can vacuum half-assed), it should mean she has to vacuum twice a week.

But the fur on the sofa appears every day as if by magic, increasing exponentially with the arrival of guests, which requires her to vacuum morning and evening… so that = 14 times a week that Mrs. Catpeople must haul out the Hoover.

See? I’ve done the math, and it doesn’t add up. Of course, I failed traditional math classes regularly, but according to my calculations,  Mrs. C will be up to her eyeballs in cat fluff inside of two weeks, because no normal human being can keep up with that amount of flying fur.

The only reasonable conclusion one can come to is that cats clearly do not obey the same rules of physics as humans do. After all, when it stands on your chest at 3:25 a.m., does your 7 lb cat not gain 25 lbs?

And when they see the invisible object of their desire at the top of the new drapes, are cats not able to travel faster than the speed of light?

Cats are like subatomic particles.  They are here and not here, both before and after, and only exist when you are looking at them.

But, while math, or indeed physics, was never my forte, extrapolating stories always was, so here is the true ending of our story-problem, the one math teachers never tell you:

One day while eating his organic Cheerios, Mr. Catpeople suddenly realizes the cat is speaking to him. At first, it seems fun, but gradually he realizes the evil creature is shooting feline thought-rays at him, trying to take control of his mind. Every where he turns, the cat is looking at him.   “Get an ax… Kill the dog….”

Mr. Catpeople sets his spoon down, and his remaining Cheerios go soggy while he wrestles with this directive. It seems reasonable, but… “Um, we don’t have a dog.”

“Did I say ‘dog?’ Sorry. I meant you should kill the annoying woman with the evil vacuum….”

Cats and the Laws of Physics was originally published as Cats and the Physical Laws of the Known Universe, © 2014-2017 by Connie J. Jasperson, published May 25, 2014 on Life in the Realm of Fantasy

Comments Off on #FlashFictionFriday: Cats and the Laws of Physics

#FlashFictionFriday: In February the House is Smaller 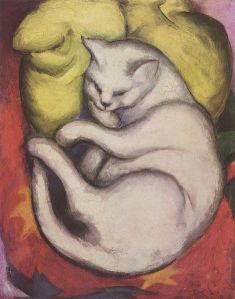 In February the house is smaller,

Shrinking to just my office, nearer the furnace.

The Room of Shame, decorated with

From Yum Yum the Cat, dead these seven years.

She was old, even in cat years, and

This was her domain.

Her ghost inhabits this room,

Lurking behind boxes filled with books

And lit by the glow of the computer’s screen.

A dusty memory keeping me company as I

Write novels that may or may not be read.

And then froze, solid.

An iceberg enshrouded my bungalow, overtook my mini-van,

And weighs heavily on the rosemary shrubs.

And I am safe and warm inside this much smaller house

With my books and my computer,

And the ghost of my feline, past.

In February the House is Smaller,  Copyright © 2017 Connie J Jasperson, All rights reserved