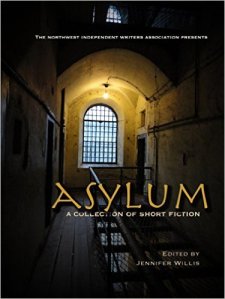 But first, the blurb:

A religious refugee fleeing for his life in his own country. A trickster asking an enemy for safe haven. A horrific visit to a psychiatric ward overrun by its charges. An unexplained theft from a biomedical lab. The last known survivor of a mysterious plague. A wormhole to the most peaceful and secret place in the world. A detective on the trail of a human trafficker.

What does asylum mean to you?

In the 2015 anthology collection from the Northwest Independent Writers Association, seventeen authors explore the obvious and hidden meanings of this theme—from a werewolf on a mission and self-sacrifice in a post-apocalyptic world, to shadowy wizardry, a questing knight, and a gentle prison for geniuses.

One of my short works, Billy Ninefingers: Fairybothering, has been included in this collection of terrific short stories. Huw the Bard makes an appearance, but the real story revolves around Billy Ninefingers, the Rowdies, and the fundamental idea of asylum–the concept around which the town of Limpwater has grown. The Fat Friar, Robert DeBolt, pushes Billy to widen his horizons and take on a bad job in this wandering tale of snark and strange majik.

Also–my friends at Writerpunk Press are about to release their second charity anthology, with all profits going to benefit PAWS animal rescue and shelter in Lynwood, WA. If you are on Facebook, please come help celebrate the release of Once More Unto the Breach: Shakespeare Goes Punk, vol. II, follow up to Sound & Fury: Shakespeare Goes Punk with them.

The link for the Facebook event is: Release Party for Once More Unto the Breach: Shakespeare Goes Punk 2

Welcome to the world of Shakespeare Goes Punk, where the Bard is remixed and nothing is sacred. Our fearless writers are back by popular demand to give you a ride on the punk train.
Five punked-up tales and three sonnets inspired by Shakespeare. All profits to charity.
As You Like It
The Tragedy of Livingston (Coriolanus)
Blast the Past: Fae and Far Between (A Midsummer Night’s Dream)
Dogs of War (Julius Caesar)
Hank (Henry V)
Clockpunk Sonnets (18, 105, 127)

Sounds intriguing! Along the way, there’ll be some great authors and contributors, some giveaways, and some fun people talking about the Writerpunk project.

And last but not least–I will be signing books in Chehalis, Washington, at the Lewis County Historical Museum’s 5th Annual Evening with the Authors, on Friday, December 4th, 2015 from 5:00 pm to 7:00 pm.

This event will feature many genres of books from local history, fiction, non-fiction, inspirational, and children’s books.

Comments Off on #EveningWithTheAuthors: Upcoming events and new releases

Tagged as 5th Annual Evening with the Authors, anthologies, Asylum, Book Signing events, Events, Into the Breach, self publishing