Tag Archives: tropes in the Dragonbone Chair by Tad Williams

Epic fantasy, like all genre fiction, has certain tropes that readers look for and expect to find in one way or another. Tad Williams injected new life into the genre in 1988 with the epic fantasy, The Dragonbone Chair. Simon’s story is volume one of the trilogy, Memory, Sorrow, and Thorn.

The events set in this world are linked by family, warped by lies and secrets kept across three generations. Themes of hubris, truth vs. falsehood, heroism, and coming of age power this truly epic fantasy series.

In literature, the word trope describes commonly recurring literary and rhetorical devices or genre-specific themes and motifs. Literary tropes define almost every writing category, including poetry, television, and art. Tropes can be found in all literature.

What Williams did with The Dragonbone Chair was to take the tropes we expect to find and turn them on their head.

We lesser mortals hope to do that with our work, no matter the genre in which we write. We know what we want to read and attempt to make our work recognizably sci-fi, western, romance, or whatever.

We must play to the readers’ expectations and exceed them. To do that, we must give the expected tropes an original twist.

The way that Tad Williams changed epic fantasy was to take what J.R.R. Tolkien did with Middle Earth and create his own world, Osten Ard. It’s completely foreign, yet has a relatable flavor because it is built around a traditional fantasy model and takes clues from our real world history.

He peopled this world with human and non-human races, all of whom have roots in human history and folklore, but with his own spin on them.

With Jiriki, we have Williams’ introduction to his version of the fair folk. He and his people are recognizably elvish but with a trace that feels almost Japanese. They are a people who suffered a violent schism that split their society into two separate cultures, Norns and Sithi.

Norns are the bad elves. 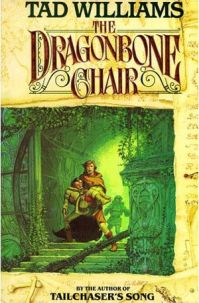 Binabik‘s people, the Qanuc, are called trolls by the humans and Sithi. They are a cross between Tolkien’s dwarves and hobbits, made wiser and less concerned about gold. The Hunën are brutish giants who serve the Norns and are often at war with the Qanuc.

There are often warriors embodying certain typical characteristics, such as the paladin or, conversely, the black knight. In Osten Ard, the broken knight, Sir Camaris, fills the paladin’s role. He is a noble knight serving the king and the religion of Usires Aedon, a riff on Medieval Christianity. Every death at his hands is a blot on his soul, and his commitment to honor is what ultimately ruins him.

As I mentioned in Monday’s post on Theme, Simon (the kitchen boy) and Miriamele (the princess) are the main protagonists and have the roles of unlikely heroes. Together and separately, they face overwhelming odds and must find courage in the darkest moments.

The hero represents hope, the human belief that salvation is just around the next corner.

Often in epic fantasy, the first villain is not the real villain. They may be the henchman of the true antagonist or a would-be usurper of the Evil One’s throne. Pryrates is evil. His henchman, Inch, is also evil.

They get what they deserve because they are not nearly as evil as the truly evil mind orchestrating the chaos—Ineluki, the Storm King. He is clever, immortal, and possesses a tragic backstory.

Inch and Pryrates are merely cruel and greedy for power over others.

When we write any novel, certain tropes will find their way into the narrative, often emerging from our subconscious without our noticing. The tropes appear because we know what we look for in a story and our subconscious mind wants to write that narrative.

Sometimes, we hear the comment that “certain tropes are overused.” This blanket statement is incorrect because a literary trope is a fundamental aspect of a subgenre.

They can be poorly written and framed by cliché treatments. Readers can and do eventually become bored with the books available when nothing written with a new and exciting spin emerges in their favorite genre.

In that case, it’s time to widen your reading horizons and try reading something in a different subgenre. Maybe you’d like a space opera or a portal fantasy. You’ll never know what you are missing if you don’t read outside your favorite genre.

Maybe you will like it, and maybe not. But no one says you have to finish a book you hate.

Even if a friend swore that they loved it.

If you’re tired of the commonalities in the books you read, be adventurous. You might like something you wouldn’t usually read, which could inspire you to change up your palate.

You might paint the tropes of your genre with brilliant new colors.

And that can only be good for the readers.

Comments Off on How the Written Universe works: Exploring Tropes #amwriting

Tagged as tropes, tropes in the Dragonbone Chair by Tad Williams, tropes of epic fantasy, writing