Today I am talking with fantasy author, Aaron Volner. Aaron has a story in the anthology, “Getting Wild in Deadwood,” and has kindly agreed to talk about the evolution of one of his most daring protagonists yet, Adalyne Huntsman. I was privileged to be an advance reader for Aaron, and loved his story, “For the Love of Gold.”

CJJ: Tell us about the theme of this anthology, and how you got involved. 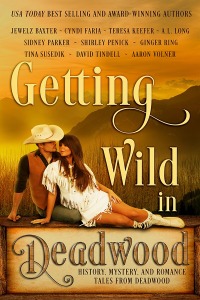 AV: “Getting Wild in Deadwood” is all about the history, mystery and romance that surrounds the town of Deadwood, South Dakota. Every story ties in either to the town’s storied past or it’s exciting modern life. Each features a romance sure to sweep readers up and take them on an emotional ride.

There’s an interesting selection of authors here, so the book has a lot of variety. While my own contribution is a historical fantasy starring a bounty hunter, there are tales about wild west outlaws, a reincarnation romance, even a time travel story in there.

This project was put together by the wonderful folks in charge of Wild Deadwood Reads, a huge book event that takes place annually in Deadwood, South Dakota (this year’s event is Saturday, June 20th). I agreed to contribute a story when they put out a call for interested authors.

I’d like to make special mention of Cyndi Faria, the author who spearheaded this project. She really went out of her way to make this a good experience for the rest of us who contributed, and I really appreciate everything that she did to help this anthology become a reality.

CJJ: Let’s talk about your protagonist, Adalyne, in “For the Love of Gold.” I love her! How did she come to life?

AV: Adalyne Huntsman,  a strong-willed bounty hunter with an unfortunate darkness in her past, took a strange path to come to where she is as a character. For one thing, in my original conception of the story the protagonist was actually male.

The idea for this tale came to me one night while I was shooting pool with my dad. Many of my best ideas come to me in pool games with him. Alas, my game hasn’t improved from it nearly as much as my writing has. Anyway, I was discussing the anthology with him and the requirement that the story be set in or around the town of Deadwood, when he shared with me his own story that took place there.

Our family lived in North Dakota for a year due to my dad’s work in the oilfield service business, which often took him across the border into South Dakota. To make a long story short, he went on an unusual call to a mine near Deadwood where a fault line had opened up in a lower level and was spilling hot water like a faucet. The water wasn’t as much of a problem as the heat, which was making it dangerous for the miners to work. So the mine owners reached out to dad’s company about the possibility of using their equipment to seal the crack and get the mine functioning again.

My imagination took that idea and ran with it, wondering what otherworldly things could spill from a crack in a mine. Such a thing might try to use the miners to protect itself. Perhaps the danger of it was how it enthralled people who came within, including the hero’s lady love.

Something about the idea didn’t sit right, and I soon realized that the story held a lot more interest for me with a female protagonist. The next thing I needed to figure out was who she was. I knew I wanted her to be tough, and self-reliant, but the challenge was determining in what way.

As I read a bit on the history of Deadwood I came across some information about the Gem Theater, a brothel run by the notorious Al Swearengen. One of his secrets to success in his industry was a tendency to beat or blackmail women into working for him. I asked myself what would happen if he tried that with my heroine, and a scene popped into my head: one of Swearengen’s goons trying to ‘persuade’ her to work at the Gem, and her turning the tables on him with some impressive gun play and a witty remark that would sting his pride.

Adalyne Huntsman evolved from that scene as a bounty hunter with complicated reasons for pursuing her chosen path. She’s a tough-as-nails woman who enjoys showing up men who underestimate her.

This presented a problem, though. The story had to include a romance, and I wasn’t sure what type of man would earn Adalyne’s respect enough to win her heart. I needed to seek the advice a real-life bad-ass gun-toting lady to learn how my bad-ass gun-toting heroine would fall for someone.

For that I reached out to my friend Helen M. Pugsley, very much a real-life bad-ass gun-toting lady and author of “War and Chess.” After a lengthy conversation with her about Adalyne’s development up to that point and her relationship with some of the other characters who appear in the story, Helen had some excellent advice.

She suggested that the way for a man to win Adalyne’s affection would be if he could make her feel safe. Not physically safe, as Adalyne has that covered herself. But emotionally safe. Someone that she can let down her constant guard around and be her true self. Someone she can share things with and feel entirely confident that it will stay between them, and who will still accept her.

Armed with that advice, I built out a secret for Adalyne that she would only share with just such a person, and began constructing her love interest, David. A man who has seen some of the worst sides of humanity, yet still retains his sense of wonder and fascination about the world.

I really hope that readers will like Adalyne, as a lot of work went into making her a real and relatable heroine. I have to say, she’s fast become one of my favorite protagonists that I’ve written.

CJJ: How can we buy this book?

AV: Orders for “Getting Wild in Deadwood” can be placed via the online form here. You’ll need an email and a PayPal account to place the order.

The books are being hand-shipped so as to include an awesome extra goody. With every order you receive a full-color insert featuring the cover art and signatures of all ten contributing authors!

This anthology is a print exclusive and only available for a limited time, so be sure to order while you can. 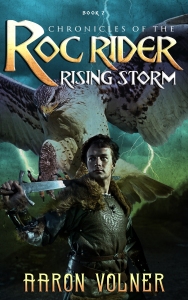 CJJ: I loved The Roc Rider. I understand you have a sequel in the works. Can you tell us about it?

AV: Yes, the sequel to Roc Rider is finally coming! “Chronicles of the Roc Rider:  Rising Storm” picks up several months after where the first book leaves off. Tanin Stormrush, the titular roc rider, has been working with new allies to try and unlock secrets from the memories he acquired from his enemy at the end of the first book.

We quickly learn that the stakes are higher than Tanin realized. His enemy has a plan that could remake the very fabric of reality itself.

Tanin’s promise to his late wife that he would rescue the roc hatched from the egg that was stolen from her proves more difficult than he anticipated. It turns out the enemy has taken to riding the creature, and it may not be in the mood to be rescued!

I’m really excited about how Tanin and his roc Zera grow in this book. Yes, we get to see them take their first flight together which is super exciting! I’m also really jazzed for people to meet some of the other characters that are introduced.

Lana, a woman from Tanin’s past and who was his fellow apprentice during roc rider training, brings an interesting dynamic to this story.

We also get to meet two of the mysterious Narn. Mentioned briefly in the first book, the Narn were invaders from beyond the great northern desert whom Tanin spent nearly a decade fighting with his original roc partner. Now, to save the stolen roc and fulfill his promise to his wife, Tanin might just have to look past his own hatreds and work alongside one of them.

The ebook releases on May 9th, with the paperback coming hopefully the same day or not long after. I’ll be hosting an online launch party via Facebook Live at 6 pm that evening to celebrate the launch.

CCJ: Where can people buy your other books?

AV: You can find all of my titles for purchase via my author page on Amazon. I also recommend that readers sign-up for my newsletter for regular updates about future titles, first reveal on new covers, and more.

Thanks so much for taking the time to talk with me about all this, Connie. I really appreciate it.

CJJ: Thank YOU, Aaron, both for visiting today and for talking about Adalyne Huntsman, who is one of the strongest women I’ve ever met. And I can wait to read “Chronicles of the Roc Rider: Rising Storm.” 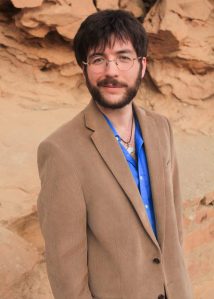 About my guest today:

Aaron Volner is a guy who gets lost in worlds of his own creation and has to write books in order to escape. He lives in southwest Wyoming with his faithful dog, Andy, and a house full of plants from all over the globe.

Orders for “Getting Wild in Deadwood” can be placed via the online form here.

Purchase Chronicles of the Roc Rider