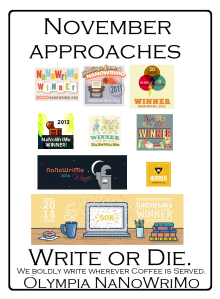 Most will do this while holding down jobs and raising kids.

I began participating in NaNoWriMo in 2010. For the first four years, 2010 – 2014, I used the month of November to lay down the rough draft of an intended novel. However, in 2015, I already had two novels in the final stages and one simmering on the back burner.

What I lacked that year were short stories. I decided to write a short story collection because I knew I had to build my backlog of submittable work. As a result, and despite suffering a respiratory virus during the entire month of November, I wrote 42 short stories for a total of 105,000 words.

That’s not counting the blog posts I also wrote. NaNoWriMo 2015 was a prolific year despite the plague!

My first year, 2010, was difficult in many ways. My story arc wandered all over the place, my main character sometimes disappeared for several chapters, and my hokey prose got away from me.

But that year was a great experience. I learned how to prep for the month of madness so that it can be a productive 30 days. I learned that October is an important month, even though you aren’t writing for official word count.

October, cold and dark, is your NaNo Prep Month.

I have a number of tricks I will share with you each Monday during the month of October, all aimed toward helping you succeed at your writing goal during National Novel Writing Month.

My goal is that on November 1st, you will be able to hit the ground running.

Once I have the foundations laid, I can write off the cuff. That is how three of my books came into existence.

For many participants, the challenge of sitting down and using the “seat of your pants” style of creative writing is what draws them to sign up.

Many authors are unwilling to commit to NaNoWriMo because it takes discipline to write 1667 words a day.

Also, they fear having to recoup any perceived losses should they find themselves in the middle of NaNoWriMo when they suddenly realize they’ve gone terribly astray. Or they fear writers’ block.

Not to me usually, because I know the secret: If you can’t write on the subject you intended, write about what you are experiencing and what interests you at that moment.

I know; ranting on paper about your life is not writing that fabulous fantasy novel you began but don’t know how to finish.

But you are writing!

The answers will come, sometimes in the middle of a rant about your evil mother-in-law.

The key here is you will be writing, and that is what is important.

Rule 1 of NaNoWriMo: SIT DOWN AND WRITE.

Rule 3: NEVER DELETE WHAT YOU HAVE WRITTEN, NO MATTER HOW GARBLED OR AWFUL OR OFF TOPIC.

There are 2 ways to create the official manuscript that you use to upload to the national site every day.

December is “Read-‘em-and-Weep” month. That is when we go over the ramblings of November and doubt our sanity.

In December, save what you want to discard in a ‘Background File’ in the same folder as the main manuscript. By doing that, you don’t lose prose you may need later.

During National Novel Writing Month, every word we write over and above 50,000 counts toward the region’s total word count. Once I hit that mark, I keep plowing ahead right to the bitter end.

Other people stop when they make the official winning word count. It’s a stressful month, so how you handle it is your choice.

If you want to sign up for this year’s month of madness and mayhem, get on the internet and go to:

Sign up, pick a NaNo name – mine is Dragon_Fangirl, and you are in business. Look me up and make me one of your writing buddies. Spend the rest of October organizing what you think you will need to begin your story on November first. Then, on the first day of November you begin writing. If you apply yourself, and write (AT the minimum) 1667 words every day, on the 30th of November you should have a novel…or something.

In reality, if you set aside one or two hours a day, and pound out the words as fast as you can during that time, you will get your word count. Never delete, and do not self-edit as you go along. Just spew words, misspelled and awkward as they may be. They all count, readable or not, and it is the discipline of writing that we are working on here, not the nuts and bolts of the good manuscript.

Revising and correcting gross mistakes will come after November 30th. The second draft is when you have time to look at it with a critical eye. What you are doing now is getting the raw ideas down before you forget them.

Never discard your work no matter how much your first reader says it stinks. Even if what you wrote is the worst crap she ever read, some of it will be worth saving and reusing later. (And don’t ask “Sharp Tongue Sally” to read your work again because if she can’t find at least one good thing, she’s not a good beta reader.)

Spending a month immersed in stream-of-consciousness writing is not a waste of time. You will definitely have something to show for your efforts, and you will have developed the most important skill a writer must have: self-discipline.

If you are doing NaNoWriMo this year, you’re quite busy right now and don’t have time to read a long post. So, here are a few quick tips and resources to help get your novel off the ground:

If you are writing a story set in our real world and your characters will be traveling, walking a particular city, or visiting landmarks, bookmark google maps for that area and refer back to it regularly to make sure you are writing it correctly.

If you are writing about a fantasy world and your characters will be traveling, quickly sketch a rough map and refer back to it to make sure the Town names and places remain the same. Update it as new places are added. This is all you need:

If you are writing fantasy involving magic or supernatural skills, briefly draw up a list of rules for who can do what with each skill. Remember:

Three websites a beginner should go to if they want instant answers in plain English:

Most importantly – enjoy writing that novel. This is time spent creating an amazing story only you can tell, so above all, enjoy this experience.

Tagged as #NaNoWriMo2016, getting the most out of NaNoWriMo, NaNoWriMo, Winning NaNoWriMo