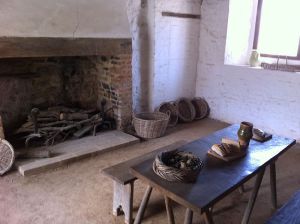 One of the things I find most entertaining about writing is putting myself mentally into the environment of the tale.   Currently in the works are 3 tales that take place, for the most part, in a wayside inn called Billy’s Revenge.

I love this place!  Billy Ninefingers, tall, genial and a bit dangerous runs a well-oiled machine. (Who doesn’t love a gorgeous man with an air hinting of danger about him?) Billy keeps the place running like a top and keeps his mercenaries, the Rowdies, working. Without Billy Ninefingers, there would be no town of Limpwater.

Billy needs to find some way to remain captain of the Rowdies and he hits on the notion of building his inn out in the middle of nowhere, a full day’s ride from the nearest town. His old family farm just happens to sit at the perfect place on the main trade road, smack in the middle of the most dangerous stretch. Lackland tells Billy right after the incident that maims his right hand and costs him his finger that if he builds his inn, a town will grow around it, and of course, Lackland is right. 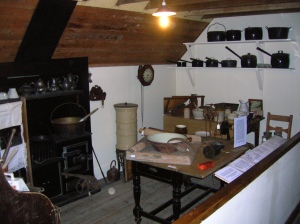 When Billy Ninefingers’s tale begins, we find him cooking in an old traditional farmhouse kitchen exactly like the one in the above picture. Billy is already cooking for a large group of mercenaries and realizes that even with hired help it will be difficult to provide all the services he wants to in a traditional kitchen, so he and Gertie the Smith (who is pregnant with Billy’s late father’s child) design an efficient kitchen with all the most modern of conveniences, more like the one in this picture, only much larger.  Achieving that in rural Waldeyn, using the materials and skills available to them is costly and frequently hilarious.

When I get stuck for inspiration I go to Wikimedia Commons and look up images that might relate to my tale–architecture, clothing, how they picnicked pre-modern times, anything that might give some idea an emerging culture might use when they stand at the beginning of an industrial revolution, as renaissance Europe did in the sixteenth century.  It’s a lot of fun, and I’ve learned that the really wealthy Elizabethans had access to some things we consider modern, such as indoor plumbing and stoves that not only heated their food, but also heated a cistern so they could have hot water.  These technologies were in turn based on Roman technologies.

On the surface, Billy appears to be an ordinary, if extremely large, man, but still waters run deep, as we often say. Most people passing through Limpwater and stopping for the night at Billy’s Revenge think brewing ale and serving cider is all there is about Billy, but they couldn’t be more wrong.  Billy is like any other mercenary, full of secrets and things he wishes he’d never seen. One wonders what is behind the name he chose for his inn–there’s a tale there, and when I’ve finished with the rewrite of The Last Good Knight, Billy will have his own stand alone tale.  The basic tale is drawn out already, and I’ve written perhaps 40,000 words, outlining the whole story-arc. 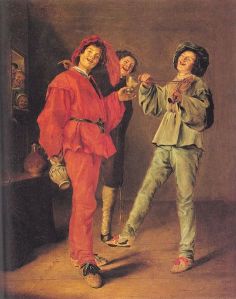 Sprinkled throughout the common room at Billy’s Revenge are many well-dressed men and women, none better dressed than those who wear the armband of the Rowdies. After all, what does a mercenary have to spend gold on, if not clothes and jewelry? Bert the Tailor, a former Rowdy who lost his leg to a highwayman’s sword keeps the men of Limpwater in shirts and breeches, and fine surcoats. With his wife, he employs several men and women to  dress the town of Limpwater in style. He would never have had such an opportunity if not for Billy Ninefingers building his inn out in the middle of the forest. 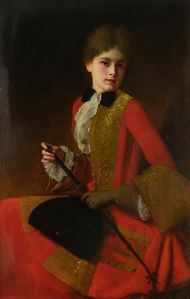 Designing the clothes and armor for the Lady Rowdies was a great deal of fun.  I had Gertie Smith team up with Bert’s wife, Lovely Ethel, the local dressmaker and also a retired mercenary to make my ladies their clothes and their armor.  We women of Limpwater are the most stylish women in any alternate reality!

Full, divided ankle-length skirts over high-heeled riding boots show nothing a lady doesn’t want to show, and emphasizes everything she wishes to flaunt. Ethel makes their bodices specifically to be worn under mail or armor, and yet stylish and very flattering in every way when the lady was not armored. Her surcoats are to die for, completely hiding the fact the lady is armored, and each of the ladies owns at least two of the embroidered creations. The dressmakers at King Henri’s court blatantly copy Ethel’s designs, but her flair is evident despite their best efforts. 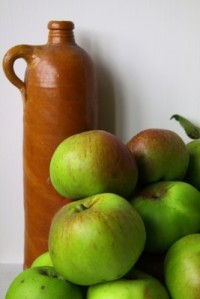 When you set a tale in a common room, such as at Billy’s Revenge, kitchens and clothing are a huge part of the story, even if they are only mentioned in passing.  Knowing the environment we are writing in is crucial, even if we are melding (as I am) the Renaissance, Victorian, and Medieval eras into one collage of a world, and throwing in a bit of Waldeynier majik and a few impossible creatures of monstrous proportions.

Along the way I’ve learned how to brew hard cider the way our forefathers and mothers brewed it, and I learned to appreciate just how amazing and clever people really are.

Reading is an adventure when the research doesn’t get in the way of the tale, when it is there as an indefinable part of the background. I hope that when  Lackland’s tale is finished, the flavors and scents of the first version of Billy’s Revenge will still be there, welcoming us and leading us to a warm corner for a mug of ale or cider, and a bowl of stew.