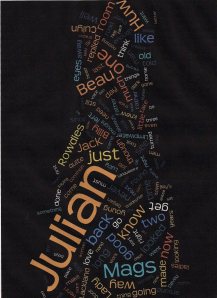 Words are awesome. I love obscure, weird words.  J.K. Rowling uses the word ‘snogging’ in her Harry Potter series, to describe couples who were engaged in prolonged kissing, or as we sometimes say where I come from,  ‘canoodling.’ My friend Irene has a new favorite word: ‘kerfuffle,’  a Briticism for a  noisy disturbance or commotion. Americans would say a ‘dust-up.’

Words are the color palette an author uses to paint his image of the world.  In English, which is a mash-up language, we have so many wonderful, wild words it is impossible to use them all in one book.

Heck–William Shakespeare loved words so much that when he ran out of words to fit a particular sentence, he invented them!

To say my father was an interesting man would be an understatement.  Born September 22, 1923, he was a product of depression-era America. A farm-boy and big for his age, he enlisted in the US Army in 1938 at the age of 15. He thought he’d found his career, but he was injured in a motorcycle accident while riding dispatch in 1945, near the end of WWII. Nearly every bone in his body was broken, and in the hurry to save his life, his left leg was set crooked. A year later, they went in and re-broke it in order to reset it straight, but he developed osteomyelitis.

Dad spent the next 7 years after the war in and out of VA hospitals.   For 7 years, the army surgeons tried to save his leg but in 1954 he lost his left leg,.The US Army officially forced him to retire, at the age of 30.  Unfortunately, Dad was never able to wear the artificial leg the VA provided him with, although we children did find some creative uses for it. It stood in the hall closet in our house in Ballard, and we charged the neighbor kids  25 cents to look at it. In Olympia it was good for scaring our cousins. When I first married and left home, it stood in the corner of my living room holding plastic flowers, a conversation piece like no other.

There he was in 1952, a single guy with rather visible disability,  wearing a heavy leg-brace, living in a world that hid the disabled under a rug and pretended everything was perfect. It was 1952, after all.

For some people, that would have been the end of everything. But not my Dad. When things began going bad with his leg, he knew he would be forced in to early retirement. He was aware that dropping out of school in the 10th grade to join the army had limited his employment choices to logging or farming, all manual labor. Dad used that time he’d spent on extended medical leave getting his high-school diploma, and then going to college. He met my mother and the rest was history.

So what does Dad’s leg (or lack thereof) have to do with weird words?  Stick with me and you will see.

Dad was a voracious reader. He read everything from Tolkien to Tolstoy, and he remembered what he had read. Dad was a draftsman, and cartooning was his hobby. He played the guitar, played in a rockabilly band and partied with Les Paul and Mary Ford. Dad bought the Encyclopedia Britannica, the entire collection of Great Books of the Western World, Grolier’s Book of Knowledge, and a wonderful little collection of books called “Lands and Peoples.”

Dad was larger than life. He was loud, boisterous, opinionated, wide-open, a generous host, and he was always the center of attention. He made his own wine and brewed beer.  He was a ham radio operator (his call number was W7NEY) and had a First Class Radiotelephone Operator License. Every year his vegetable garden grew more food than we could possibly eat, no matter how much we canned.

Dad was Fred Flintstone on Steroids.

Dad Loved Words. Big words, small words, short words, long words–Dad loved them all. He spun hilarious yarns about the ‘Kamaloozi Indians’, a non-existent tribe whose beloved Chief, Rolling Rock had gone missing, The tribe was so distraught they posted signs in every mountain pass that read “Watch for Rolling Rock.”

Everything in his toolbox had a name that was his own invention: Screwdrivers were ‘Skeejabbers.‘

Dad loved words so much he mangled them just because he loved the way they sounded. Sometimes he became so frustrated he lost his words and resorted to creative cursing.

Dad’s birthday is coming up, September 22. He died in 1991 at the age of 66, from complications of Osteomyelitis. He would have been 90 years old this next Sunday. He is gone, but definitely he will never be forgotten. His love of words and of reading, art and music had an impact on me and my siblings we will never live long enough to outgrow.

What better environment for a future bender-of-words like me to grow up in than a home where any book was fair game, and reading was not only encouraged, it was required?

The word for the day is ‘querl’–which means to twist or curl. And that is what my family all loves to do with words!