Yesterday was the annual field trip with my grandson’s class.  This time I didn’t get to ride on the bus (thank all the stars in heaven) but we did meet the classes down at Edmonds Beach on Puget Sound, in Washington State.  Edmonds is located in the central Puget Sound Basin.

Puget Sound is a unique, complex series of saltwater estuaries and deep channels at the southern end of the Salish Sea, protected from the North Pacific by the Olympic Penninsula, Vancouver Island, and the San Juan Islands. The ecology is a fragile system, relying on the cold but protected salt water. The United States Geological Survey (USGS) defines Puget Sound as a bay with numerous channels and branches; more specifically, it is a fjord system of flooded glacial valleys.

MOON SNAILS? Anything called moon snails must be awesome! See the video here: Jonas talks about Moon Snails on YouTube 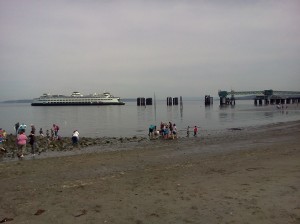 We loved watching the ferries arriving and departing at Edmond’s Dock.  Washington State Ferries is a passenger and automobile ferry service owned and operated by the Washington State Department of Transportation that serves communities on Puget Sound and in the San Juan Islands. It is the largest passenger and automobile ferry fleet in the United States and the third largest in the world by fleet size. The service is also the largest in the world based on the number of vehicles carried, having carried 11 million annually. 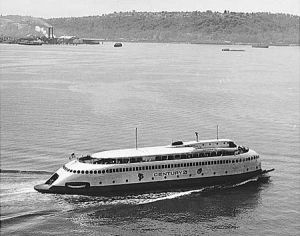 Seeing the Spokane departing for Kingston on and returning reminded me of being a kid, and sailing on the Kalakala, which was the most awesome ferry ever. It was as modern and streamlined as a space ship, and was a unique part of Puget Sound maritime history.

We walked up the beach and down the beach a kajillion times, and ate our picnic lunches. It was an awesome day.

All I know is, grandma is still tired and has sand in her shoes. She may need another nap.

One response to “Edmonds Beach”