You split my what?

Recently I was asked “What is an infinitive, and what’s so bad about splitting it?” My answer was “It’s a way of modifying a verb and it’s not like we’re splitting atoms here–the world will not explode.”

SO if I want to boldly go where no man has gone before, I’m going to have to sunder (or split off) the bare verb ( the basic dictionary form of the verb) GO from its infinitive marker (which happens to be a preposition) TO by inserting an adverb: BOLDLY. (It’s was edited to read its-thank you Irene Roth Luvaul♥)

So what’s the big deal? Why all the hullabaloo over such a simple, innocuous thing as separating the the infinitive TO GO with an adverb, BOLDLY?

Grammarians will fight to the death over the most picayune little points of contention. The split infinitive is one of those grammatical rules that wars have been fought over in the in the hallowed pages of usage guides for two-hundred years at least. Beer has been spilled over this particular grammatical construction.

The battle really heated up in 1864 when Henry Alford wailed about it in his classic usage guide, Plea for the Queen’s English:

A correspondent states as his own usage, and defends, the insertion of an adverb between the sign of the infinitive mood and the verb. He gives as an instance, “to scientifically illustrate“. But surely this is a practice entirely unknown to English speakers and writers. It seems to me, that we ever regard the to of the infinitive as inseparable from its verb. And, when we have already a choice between two forms of expression, “scientifically to illustrate” and “to illustrate scientifically,” there seems no good reason for flying in the face of common usage.

Meh. What, are we speaking Latin here? The rule forbidding a split infinitive comes from the time when Latin was the universal language of the world, and the English language was in a terrible state of flux. All scholarly, respectable writing used to be done in Latin and, in Latin, splitting infinitives is a no-no.

Henry Watson Fowler took a dim view of Henry Alford’s pickiness. “The ‘split’ infinitive has taken such hold upon the consciences of journalists that, instead of warning the novice against splitting his infinitives, we must warn him against the curious superstition that the splitting or not splitting makes the difference between a good and a bad writer.”

Merriam-Webster’s Dictionary of English Usage says, “the objection to the split infinitive has never had a rational basis.”

Indeed, according to Grammar Girl  Mignon Fogarty, “Today almost everyone agrees that it is OK to split infinitives.” 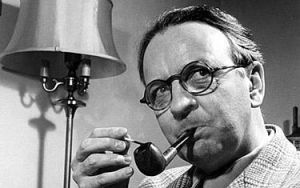 Raymond Chandler complained to the editor of The Atlantic Monthly about a proofreader who changed Chandler’s split infinitives:

“By the way, would you convey my compliments to the purist who reads your proofs and tell him or her that I write in a sort of broken-down patois which is something like the way a Swiss-waiter talks, and that when I split an infinitive, God damn it, I split it so it will remain split, and when I interrupt the velvety smoothness of my more or less literate syntax with a few sudden words of barroom vernacular, this is done with the eyes wide open and the mind relaxed and attentive. The method may not be perfect, but it is all I have.”

I agree. I shall forever attempt to boldly split infinitives as needed, when and where I feel so inclined.

4 responses to “You split my what?”