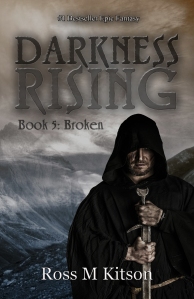 One the best aspects of my life is to be involved in the process as some of the finest fantasy authors out there make their work ready for publication. A longtime friend of mine is Ross M. Kitson, author of the Prism Series. Several years ago I had the privilege of working with him on Darkness Rising 3–Secrets, and I recently had the absolute joy of working with him on the soon-to-be-released Darkness Rising 5–Broken, the new cover of which has just been unveiled.

This new cover completely speaks to what is inside this book. And let me just say I LOVE that series of books–Kitson’s world is dark and dirty, and yet it teems with vibrant, colorful life. His characters leap off the page, and for those like me who love a really deep fantasy read, he creates an epic-fantasy that is truly original.

‘Beneath the veneer, beneath the beauty, there is always the coldness of stone.’

Tragedy has torn apart Emelia and her companions, a terrible betrayal instigated by the Darkmaster, Vildor. A devastated Jem struggles to control the fearful power of the crystals, becoming distant from his closest friends. Hunor and Orla are tested by a secret from the past, a revelation that will change everything between them. In the Dead City, Emelia begins a search for her past, a journey that will plunge her deeper into the darkness of Vildor and his twisted schemes.

Desperate to seek aid in their battle against Vildor, the companions travel north to Belgo, capital of North Artoria. But everything is not what it seems in the palace, and danger lurks in every shadow, whether cast by friend or foe.
Separated and alone, can Emelia, Jem and Hunor hope to prevail? Or will the evils of the present and the past overcome them at last?

Darkness Rising 5 – Broken is the fifth in the epic fantasy series that reviewers are calling  ‘epic and spellbinding.’ It is a must read for fantasy fans the world over.

That’s pretty intriguing. But let me just say that Ross Kitson doesn’t rely on the great bastions of fantasy, Tolkien’s Lord of the Rings or Tad William’s Memory, Sorrow and Thorn for his inspiration, although he is a great fan of theirs. Kitson’s world is nothing like anything I’ve ever read, yet it is familiar enough that the reader becomes immersed. His characters are  uniquely individual, with great strengths and each with weaknesses that can and do create tension within the group.

If you are looking for a new, truly epic fantasy series, book one of the Prism Series is currently on sale for .99 for the ebook

Ross M Kitson is a published author in the fantasy genre, with an ongoing series (The Prism Series), a number of short stories on Quantum Muse web-zine and several stories in Steampunk and fantasy anthologies.

His debut series for Myrddin is due for release in October 2012, and is a sci-fi series set in modern-day York. It is written for ages 12+, although its combination of killer androids, steam-powered airships, kick-ass heroines and action packed chases will appeal to all ages.

Ross works as a doctor in the UK specializing in critical care and anaesthesia. He is happily married with three awesome children, who nagged him incessantly to write something that they could read. His love of speculative fiction and comics began at a young age and shows no signs of fading.

For the infinity Bridge:         http://thenuknights.weebly.com/