I’ve been doing a little more reading lately. I like reading on my Kindle.  Might have some book review blogs to write for Best in Fantasy soon. I had to cut back on that because my editing business picked up rather sharply and my previously copious quantities of free time suddenly became  moot.

Also I’m a regular contributor at Edgewise Words Inn, which has been a LOT of fun. But this means I must occasionally write…doh! 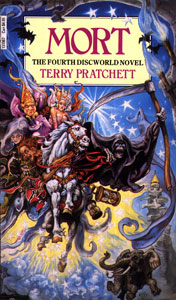 The reading world suffered a great loss when we heard the news that Sir Terry Pratchett had died. His work was hilarious, irreverent and absolutely divine. Of all his many great characters, I think Death was his best, and Mort was my favorite book in the Discworld Series.

Losing him just emphasized the rain this weekend.  It’s been a strangely warm winter for us Pacific Northwesterners. For one thing, down in my valley we had no snow. Usually we get at least a small snowstorm. We’ve had a little frost, but nothing terrible.

Also, we’ve had very little black-ice this year, for which I am grateful, but truthfully that really is odd. Black ice, sometimes called clear ice, refers to a thin coating of glazed ice on a surface. While it’s not truly black, it is virtually transparent, allowing the black asphalt/macadam roadways or the surface below to be seen through it—hence the term “black ice.”  It’s been a winter staple here for the last few years–going to work in the morning on a safe, dry pavement takes all the adventure and high drama out of the morning commute.

It was a normal rainy March weekend, and I’m so spoiled by a winter of sunshine and warm weather, that I feel all whiny about it. 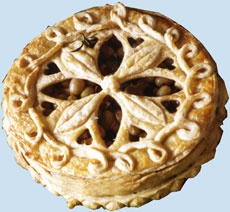 So  on Saturday we got over the way most people do–we went shopping. I upgraded my phone and and got a fancy thing or two–and we bought food, and baked a pie in honor of Pi Day.  But not one this fancy—>

It was sort of fun– I don’t really do a lot of shopping in person, because the Drones of Amazon will deliver anything I need, from glittery hair clips to zebra print carpets. I get my music, kindle books, clothes, shoes–you name it, I get it from Amazon. They even sell books, and deliver them right to my house! 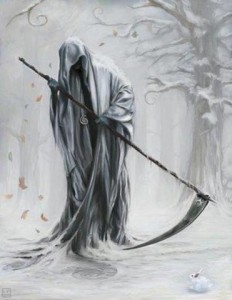 But Sunday was a different thing. Dealing with a kidney stone. Didn’t sleep well–woke up at 2:30 am and couldn’t get back to sleep.  Suffered the agonies of the damned but survived another one. Stayed home and figured out how to use the new technology. Tried to catch up on my writing.

Accidentally blew off a write-in.

Actually, when I am having a day like that, I doubt if I should be allowed behind the wheel of a vehicle… .