Marketing tips from the eight-year-old

My oldest daughter and her son came to stay for a long weekend. It was fun, and wonderful, having The Boy around, especially now that he is eight. He is becoming a well-behaved person, and developing a few manners, although he is still only eight, and rather a barbarian in many ways

Of course, it poured down rain while he was here. but we had fun anyway.

He discovered that grandma is a writer, and writes “real books.” He was quite proud. “I’m gonna read these when I’m a grown up.”

I confess, I did bask in the glory, until he explained that I had made a huge marketing error.

My biography is in the back of my books, but not my picture. The Boy said, “I want the kids at school to know that my grandma writes real books, but they won’t believe it if there’s no picture.”

I didn’t want to tell him that the camera steals my soul, and I hate every picture I’ve ever seen of me. But, after thinking about it, I agreed that he might have a point.

I also didn’t tell him that people who write books are a dime a dozen. Everyone you meet either is an author, or has a couple of the ne’er-do-wells in the family. Apparently people who are otherwise unemployable write books, in order to appear useful.

I didn’t tell him that, because for a shining moment, I was special. He was proud of me, his grandma, because I can write real books. I have to admit, that felt pretty good.

So we looked through the pictures of me. I thought this one would work, as it’s the most recent and hides my ample, middle-aged waistline.

He said, “No–it doesn’t really look like you. You’re hair is a lot fuzzier than that.”

I said, “But I combed it just for that photo. I even put on lipstick.”

So I tried a different one. “This one is only two years old.” 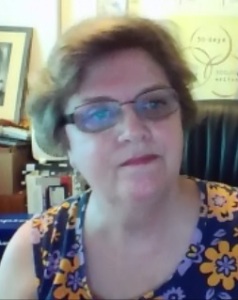 I thought it was perfect, as it also hides the ample, middle-aged, waistline.

He was not impressed.  “Are you kidding? Your hair’s too short in that one.”

“Get real, Grandma–people want to see the real you. The one who cooks and stuff.”

“Trust me, Grandma. I’ve read a lot of books, and they all have the writer’s picture in the back. I want my friends to know it’s you.”

After much discussion he picked a picture.  I doubt it will go in the back of a book, but this is what he picked. 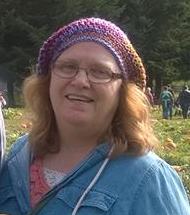 “Why did you pick that one? I use that one as my Facebook icon. ”

“Because that’s how you look. Comfy, and like a grandma. With fluffy hair.”

It’s hard to argue with that sort of logic. But I’ll probably have to have a professional picture made at some point.

One that doesn’t show my middle-aged waistline or the comfy fluffiness of my hair.

10 responses to “Marketing tips from the eight-year-old”