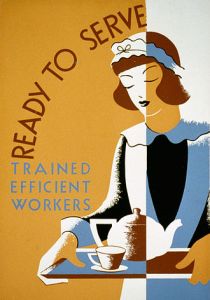 Over the course of my life I have worked in a wide variety of jobs.

1970s-80s – a field hand for a multi-national Christmas tree company, photo lab tech, waitress in a bakery and also a deli

1980s-90s – a hotel maid, a dark-room technician, a bookkeeper, and an office manager

None of my work was glamorous but I always found something to enjoy in each job, and by going to work I was able to pay my bills, which I did enjoy. Sometimes, especially during the Reagan years and into the 90s, wages were low and jobs were scarce. I held two and three part-time jobs just to keep the roof over my children’s heads and food on their table.

During the late 70s and early 80s I worked for the J. Hofert Company (Christmas trees) and absolutely loved the work. It was outdoors, paid $3.25 an hour and it was seasonal, but I was able to work a lot of overtime, as field hands were as hard to get then as they are now. 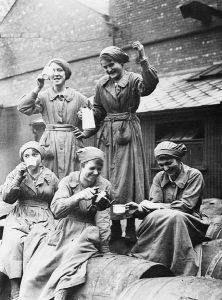 As I said, none of my work was glamorous but I worked with great people, many of whom are still my close friends. My favorite job was as a hotel maid at a large hotel in Olympia–the work was hard, but I enjoyed it for 12 years. For most of the 1990s it was my weekend job that I kept along with my bookkeeping job, because the hotel was a union shop.

I worked every weekend and every holiday and yes it was not easy, but it was what it was. My kids were good and supportive and knew I was doing my best.

In 1993 things were easier. As a bookkeeper/office manager I made $7.50 an hour (two dollars over minimum at the time) and worked less than 30 hours a week with no benefits whatsoever. As a hotel housekeeper in a union shop I made $8.50 (three dollars over minimum) and worked about 20 hours a week, giving me enough from the two jobs to live on and provide for my children.

No matter what other job I had, I kept my weekend job at the hotel, because when other jobs went away, I always had that one to fall back on. Because of the union, we who did the dirty work earned a little more than others in that line of work, and had a few benefits, such as health insurance and a 401k. We would have had nothing more than minimum wage without the union.

Not every union is good, and not every union is reasonable. But while I don’t agree with everything every union does and stands for, I do feel gratitude that I and my family was protected by a good, reasonable organization during those years that were such a struggle for me. Every worker deserves that his/her employer treats them with respect and a fair wage in return for their labor.

I write books now, and the world is a different place in many ways. Even so, someone must do the dirty jobs, the work that no one else wants. I have nothing but respect for those who work long hard hours in all areas of the service industry, struggling to support their families. Look around you, and see the people who make your life easier, by being there every day doing their job.

Every one of them is a person just like you, a living, caring human being with hopes, ambitions, triumphs and tragedies. Every one of them has a story and a reason to be where they are, doing the task they have been given.

Say a little thank you to all those who take your unintentional abuse when you are stressed out and “don’t have time to wait,” or are upset by things you have no control over and need to vent at someone who can’t or won’t fight back. Give a little thanks to those who do the dirty work and enable you to live a little easier.