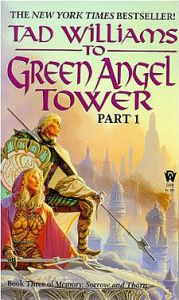 I am thrilled that Tad Williams is writing another series of books set in Osten Ard. Tad is an author who  absolutely understands the craft of writing fantasy. He knows what makes epic fantasy EPIC. There is just the slightest hint of the rebellious indie in his work, which makes it a little wild. But more than that, Tad understand how important it is to make the limitations and roadblocks forced on the protagonists power the narrative.

If you love epic fantasy and have not read his powerful trilogy, Memory, Sorrow, and Thorn–you should.

In Tad’s work, magic systems feel natural, organic and are not all powerful. I love epic fantasy books where the magic systems have been as well thought out as the political systems, and the characters are limited in what they can do with them.

I despise books where the hero/heroine can do anything, and be as awesome as she/he needs to be, all because he/she has a special power. No need to worry about planning that mission, because our hero can read minds and predict the future–he knows exactly how to thwart Evil Badguy. Several boring scenes later, an opportunity for something interesting turns up, but no! The author has blessed his favorite supercharacter with (cue the fanfare) amazing magic powers that have no explanation, and apparently no limits.

If you are writing fantasy, consider this–Infinite abilities instills infinite boredom in me as a reader.

Let’s talk about magic. Who has magic? What kind of magic–healing or offensive or both? What are the rules for using that magic and why do those rules exist? Magic is an intriguing tool in fantasy, but it should only be used if certain conditions have been met:

Even if it does not come into the story, you should decide who is in charge of teaching the magic, how that wisdom is dispensed, and who will be allowed to gain that knowledge.

Magic and the ability to wield it usually denotes power. That means the enemy must be their equal or perhaps their better. So if they are not from the same school, you now have two systems to design. You must create the ‘rules of magic.’  Take the time to write them out, and don’t break the laws, without having a damned good explanation for why that particular breaking of the rules is possible.

Limits make for better, more creative characters. In the Mists of Avalon, Marion Zimmer Bradley made the magic a natural outcome of religion, something only a few characters had access to, and they paid a great price each time they used it.

Lets pretend we have a mage, Gerald—we’ll make him a lowly journeyman mage, just allowed out of magic school on his own. Events beyond his control occur, and only he can rid the world of Stinky Sam. Sam is a very powerful, very naughty wizard, who will crush young, untried Gerald with no effort whatsoever.

Let’s say Gerald has a few skills at the beginning: he can draw water out of the air for drinking, and maybe he can use the elements of fire and lightning as weapons. Can he also use magic to heal people?  Can he heal himself?  What are the rules governing these abilities and how do these rules affect the progress of the story?  When it comes to magic, limitations open up many possibilities for plot development.

For this to be a good story, our bad guy, Stinky Sam, must be a master in whatever area Gerald has chosen–and he should have a few skills and abilities Gerald might never learn.

This means Gerald must work hard to overcome the obstacles set in his path by Stinky Sam.  With the successful completion of difficult tasks, and overcoming great hardships, Gerald will learn what he needs to know about his magic/gifts, and acquire the ability to counter Stinky Sam’s best efforts in the final showdown, although it will be difficult.

In great fantasy, evil is very strong, and has great magic–but there are rules.  The evil one might be a bully and he may have some awesome skills, but he’s not omnipotent, or there would be no story. All magic systems have limits, which means he has a weakness. With the discovery of the antagonist’s limitations, your character has the opportunity to grow and develop to his fullest potential in process of finding and exploiting it.

2 responses to “Elements of the story: Crafting magic systems”