#amwriting: Taking the #NaNoWriMo novel to the next level

You took a leap of faith. You’d had this idea for a novel rolling around in your head for years. Someone told you about Nation Novel Writing Month, and on the spur of the moment you joined.

Then you were committed. Every day, no matter what disaster was occurring on the home-front, you sat down and wrote at least 1,667 words.  Some days it was hard, the words just weren’t there. But you persevered and some days you were on fire–everything flowed. Your story took you places that amazed you.

Now it’s November 30th and you have your 50,000 word manuscript, and the all-important winner’s certificate from NaNoWriMo dot org!

But now you don’t know what to do next.  Whatever you do, DON’T SHOW IT TO YOUR ADORING FANS JUST YET. This is not the time to ask for feedback unless you want to be lied to. They’ll look at you with a possum-in-the-headlights smile, and say “Wow…this is really…different.”

What they’re really thinking is, “Holy s**t. This disjointed, hokey mess sucks.” That friend will poke needles in their eyes before they read another piece of your work again.

What you must do is put it in a drawer for a month or two. Write some short stories, or start a new novel. You have to step back from this in order to see what need to be done with it, and you can’t do that right now. SO–in January or February:

First let’s talk about that manuscript.

When you were writing it, you were concerned about increasing your word-count. Someone told you not to use contractions, as the word ‘doesn’t’ counts as one word while ‘does not’ is two. Foolishly, you did just that. 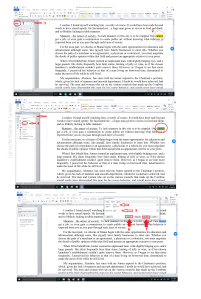 Now you must go through and make that awkward, stilted phrasing into contractions. Do a global search:

Second, let’s look at how we are telling the story. In the rush of the first draft, of getting all our thoughts about the story-line down, we use a kind of mental shorthand and write things like:

Readers don’t want to be told how the characters felt—they want to see.  When you come across this in your first draft, now is the time to follow those road signs and expand on the scene a little. Instead of telling the reader that Martha was furious, you will show this emotion.

When you go back through your manuscript, change each ‘telling scene’ to a ‘showing scene.’ When you show the reader the emotions it deepens the story and enables the reader to be involved. 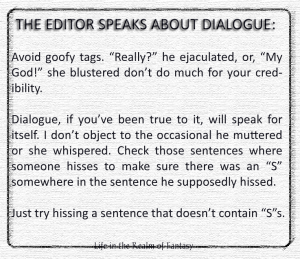 Third: too many dialog tags. When only two characters are in a scene readers should be able to keep track of speaker ID with ease. In those situations, speech tags are rarely, if ever, needed.

Instead of using a speech tag, consider inserting an action beat (a burst of action) before a line of dialogue. This identifies the speaker and offers opportunities for you to deepen character chemistry, conflict, and emotions.

Annie felt something trickling down her cheek. She wiped it, and her hand came away with blood. Her companion was covered with gore, but at least he was in one piece. “John, are you okay?”

She reached toward his shoulder, toward the torn shirt, the ugly gash—but something held her back. “Your arm. I thought maybe ….”

“You thought it was bad.”

The look in his eyes forced her to glance away. “Well, yes. But if you say you’re okay….” Her face burned.

John bent down, digging around in the medical kit, hiding his grin. His thoughts ran wild, but he said only, “Let’s get ourselves doctored up. We’ve a long way to go.”

Replace those empty speech tags with an emotion-infused narrative. However you must remember that the reader needs to have clear direction as to who is speaking to whom, otherwise you will lose them. Don’t make more than a few exchanges without dialogue tags, and make those you do use simple. Said, replied–we really don’t need to get fancy.

Fourth: Too Much Information. This is my personal bugaboo. As I am writing I spill my guts and write all the background as I am thinking it. The reader doesn’t need to know everything up front. These passages are really notes telling me as the author what direction this tale is supposed to go.

My beta readers always tell me the reader doesn’t want to read the history of the world–they want to get to the action. THEY ARE RIGHT!

Fifth: Make sure you have a good story arc:

SO before we show this novel to anyone, we have a lot of work to do.

Let this nano novel rest for several months before you do anything with it. Start a different novel, and come back to this one later. When you look at that original first draft with fresh eyes and begin looking for these things, you will be amazed at how well your novel will begin to come together. During this rewrite, your characters will grow and develop, and your plot will really begin to move along. This is when you really write your novel.

4 responses to “#amwriting: Taking the #NaNoWriMo novel to the next level”