#amwriting: evoking a sense of place

The Garden of the Author, by José Benlliure Gil via Wikimedia Commons

Summer has officially arrived here in the Pacific Northwest. This is a time when I can take my notepad out on the back porch, enjoying the garden and, to a certain extent, people watching. I love my back yard and my porch, feeling as if the heart of my home is there.

My work involves creating worlds and making them real to the reader. All the worlds I write about are a composite woven of my personal experiences and places that I love.

My town is a tiny place, slightly more than a village, and less than a city. Historically it is a mining town. Three things kept my town alive during hard times: the sandstone quarry, the coal mines, and timber. Now it’s a bedroom community for Olympia, the capital city of the State of Washington.

I’ve been here since 2005, and although I love my small house and garden, I don’t really fit into this community, which is probably my fault. Most of my writing groups are in Olympia, and my favorite places are in that city too. But I have a “soul-home,” which is comprised of the places that had the most profound meaning to me in my life. My soul-home is made up of three places that I have lived, which have all had a profound effect on me.

One part of that soul-home is Seattle. I lived there until I was 10, and went to West Woodland Elementary School.Our house was in Ballard, an urban community of fishermen who spent most of their time fishing in Alaska, and who were first-generation Norwegians. Everyone, including my family, was Lutheran, which was a cultural thing as well as religious. In the late 1950s to the early 1960s, Ballard was a small town within the big city, and the kids in my neighborhood were close-knit.

Seattle and the greater Puget Sound area is one component of my soul home, mainly because of the many immigrants whose cultures made it what it is today. The Pacific Northwest and Seattle, in particular, is a fusion of Asian, Norwegian, Native American, and hardy sons and daughters of the pioneers who came from all over the world seeking a better life. We are a unique mix and happy to be so.

In Seattle, music takes on a life of its own, and the world listens. Wikipedia has a page that lists all the famous musicians who came out of Seattle, and it’s pretty impressive. You can check it out here.

Music, art, and literature are celebrated in Seattle, and the influence the city has on Pacific Northwest culture is felt all up and down the Puget Sound region. I was fired to write my own books by reading the works of local area authors like Frank Herbert, Greg Bear, J.A. Jance, Terry Brooks and so many, many more Northwest authors. The Puget Sound region is a breeding ground for creativity, and Seattle is where it comes together.

But I am also a product of many summers spent in Cannon Beach, Oregon. I love that place so much that it is another piece of my soul-home. Terry Brooks and Ursula K. LeGuin are also fans of the North Oregon Coast, as are many famous musicians and actors. Something about it calls to the wilder side of me, and it seeps into my work.

But the primary portion of my soul-home came into my life when I was ten, and my family moved to Olympia, to a home on Black Lake. We moved from a nice, large, two-story home in a middle-class neighborhood to a tiny, rundown, ranch-style vacation house miles from civilization. It was cold and damp in the winter, and cool and pleasant in the summer. The house was barely livable, but the property was what my parents moved there for: the 350 feet of waterfront and the sandy beach, with forested land going back 5 acres to the county road. Dad was a WWII vet, and fishing was his greatest hobby.

The first thing I saw the day we moved there wasn’t the lake, although it was impressive. It was the Black Hills that dominated my view—black and forested with cedars, firs and hemlock, and rising high over the other side of the lake, they dominated the front windows. The many moods of the lake were out there for us all to see every minute of every day. You knew what going to happen by the direction the wind was coming from.

I hated it. I was torn from everything I knew, thrust into a world where I had no friends, and didn’t know my way around. Nevertheless, after the first, terribly difficult months of adjustment, I grew to love my Black Lake home, relishing the rural privacy and the deep connection to nature we formed, without our knowing it. When I left home, I carried a piece of it in my heart, and it will always be with me. My contemporary literary fiction is usually set there, with the bits and pieces I loved so much about that home forming a memory that shines, and I am able to give that place to my readers.

Just as my world, and the place I think of as my home was created by many generations of immigrants and pioneers filled with hope and the dream of a better life, so are most other cities and cultural centers.

The sense of place you instill into your work is the sure knowledge of where it is and what it represents to the protagonist. If you are crafting a world that doesn’t exist, as I have done with most of my work, you must make it real. Take some of what you love about your home, your town, and your culture, and write it into your work.

The knowledge of place is created in the reader’s mind by subtle cues, small descriptions, minor mentions over multiple scenes. A few words, little references to the background setting give the reader a framework upon which his imagination will build the rest.

Terry Brooks’ world of Shannara is real in his mind, because he lives there, just as Neveyah is real to me for the same reason. Both worlds have evolved from the reality and landscape we live in and love so much, yet they are radically different, both from each other and from the Pacific Northwest. They are composites of our imaginations, made real by our experiences. 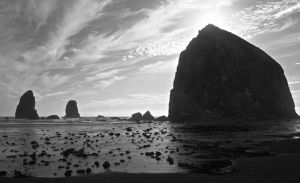 When you write a novel or an essay, whether it’s fiction or non-fiction, the setting is how you create the sense of place, and must be a creation of many layers:

None of these layers will be overtly discussed or described at length in your work unless it is part of what creates the tension and drives the plot. But you, as the author, must know and understand these components as if they were your soul-home. That knowledge will come across in your work via small cues, and your readers will have a firm picture of the world in which your work is set.

4 responses to “#amwriting: evoking a sense of place”