The Quest for the Rare, Diamond Studded MacGuffin #amwriting

The nerve of some characters… lazy creatures.

Right now, my protagonist is staring at me. “What the heck is a MacGuffin, and why must I go searching for it?”

“Because,” I reply, “I’m the author, and I said so. You owe your very existence to me, and right now you’re doing nothing. I need to keep you busy and the plot moving forward. In your case, the MacGuffin is Dragon’s Milk, which your future mother-in-law, Queen Evilla, requires for some obscure reason. It should be placed in this diamond studded container.”

“Seriously? You want me to drag a diamond studded bucket through the seediest part of town just to milk a dragon?” Sir Rediculis is the only man I know who manages to look noble even when he pouts. “They do have that little issue of flaming breath? Remember that? Thanks to you, my armor no longer shines, no matter how I polish it.”

Oh, yeah… I do recall that scene. It was awesome, the way he nearly got fried. But it was his squire who really did the dirty work…  still, the hero must have a glorious task, and what could be more glorious than a diamond studded bucket of dragon’s milk?

So… ah ha!  I can have him cross the… but he could accidentally… which will give me the opportunity to promote Randall the Former Kitchen Boy turned Squire to Hero First Class. “Now, now, Rediculis. Be a good hero.” I embrace my hero one last time. “Big knights don’t whine. Princess Babs has her sword strapped on and is ready to go. Your squire has the map, and he’s ready too. Get out there and bring back my MacGuffin.”

Randall regularly fantasizes about spending a week or two trapped in a cave with Princess Babs, naughty boy that he is. Lucky for him he’s nimble, as fetching the MacGuffin will offer me the opportunity to write more hot scenes set in the Fiery Lair of Doom.

Both Randy and Babs are lots braver than this bad boy and they don’t mind a little dirt, so… note to self: have Sir Rediculis cross the Lake of Boiling Dragon Poo via the Rickety Rope Bridge…  heh heh… this is gonna be fun.

So, let’s talk about thin plot devices, or MacGuffins.

According to the Font of All Knowledge, Wikipedia: The MacGuffin technique is common in films, especially thrillers. Usually the MacGuffin is the central focus of the film in the first act, and thereafter declines in importance. It may reappear at the climax of the story but sometimes is actually forgotten by the end of the story. Multiple MacGuffins are sometimes derisively identified as plot coupons.[1][2]

The name “MacGuffin” was popularized by Alfred Hitchcock in the 1930s. The MacGuffin’s importance to the plot is not the object or goal itself, but rather the effect it has on the characters and their motivations. Many times, it is inserted into the narrative with little or no explanation, as the sole purpose of the MacGuffin is to move the plot forward.

If you are crafty about your plotting and careful how you portray your plot device, it ceases to be a MacGuffin and becomes a quest worthy of writing a story about. Hitchcock was the master at creating great, compelling stories around thin plot devices:

Quote from Wikipedia:  Hitchcock explained the term “MacGuffin” in a 1939 lecture at Columbia University in New York:

Hitchcock’s term “MacGuffin” helped him to assert that his films were in fact not what they appeared to be on the surface. 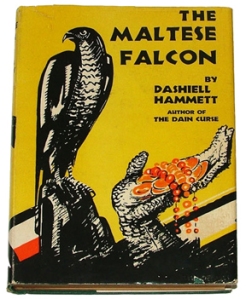 Thus, the object of the quest might not be the purported “Maltese Falcon” after all, despite the obvious quest to acquire it. The true core of the story might really be the internal journeys of Sam Spade and Brigid O’Shaunessy, two people brought together by the quest, and whose lives are changed by it.

A good plot device emerges naturally, MacGuffin or not. Done well, it will be entirely accepted and perhaps even unnoticed for what it is by the reader. It can take the form of an object or person being pursued, often by both the protagonist and the antagonist. A good plot device can also be more intangible, perhaps the pursuit of love or power.

If the object of the quest is too outrageous or is inserted clumsily, the reader won’t be able to suspend their disbelief, and likely won’t finish the book.

Give the quest for the MacGuffin some closure. If the quest to acquire the MacGuffin is only meant to give the characters something to do while they are interacting and chemistry is happening, please, at least have it be a thread that continues throughout the entire story, as Dashiel Hammett did in The Maltese Falcon.

Cover of the original novel “The Maltese Falcon” 1930 File:MalteseFalcon1930.jpg, Fair use

10 responses to “The Quest for the Rare, Diamond Studded MacGuffin #amwriting”