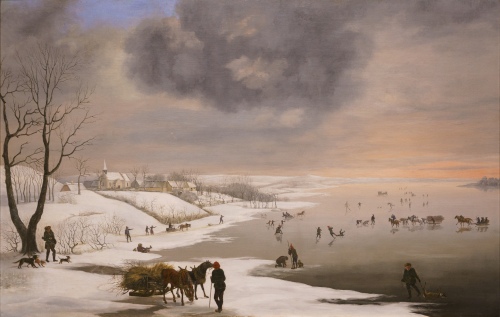 The above painting, Winter Landscape with Brabrand Church, by Christian David Gebauer, is a perfect illustration of a day in the life of a Danish village as captured by the eye of an artist. One of the last paintings made before Gebauer’s death in 1831, it is considered a centerpiece work of the Danish Golden Age, a period of exceptional creative production in Denmark during the first half of the 19th century. Gebauer was heavily influenced by the works of the Dutch Golden Age, a period in Dutch history roughly spanning the 17th century, during and after the later part of the Eighty Years’ War (1568–1648) for Dutch independence.

If you are writing fantasy, which is often set in rural late-renaissance-era environments, you can find all the details you need in the art of the past.

Artists painted details, not visible from a distance, but which combine to give the mood of the piece. They painted not only what they saw, but what they felt. They gave us a hint of how people really lived, laughed, and loved before the industrial revolution transformed the world into the modern, technologically driven place we see today.

In Winter Landscape with Brabrand Church, Christian David Gebauer shows us villagers dressed for warmth, enjoying themselves on the ice. Others are working, bringing in sledges filled with hay. A hunter and and his dogs are returning, perhaps empty handed. A bag hangs at the hunter’s side but isn’t full. The ice-fishermen are having better luck.

A woodcutter admonishes a boy, perhaps his son, to stop fooling around. His machete hangs in his right hand, as he fights what he knows is a losing battle. It’s evening, the day has been long, and children who have worked all day just want to play and have fun.

The sky takes up fully half of the painting–the church and the people are small beneath it. Beneath the powerful sky, there is an air of busy enjoyment to the painting. The hilarity of those skaters unable to keep their balance is juxtaposed against the hard-working laborers and the cozy prosperity of horses pulling laden sleds.

The entire story of one winter’s evening in this village lives within this painting, all of it captured by an artist nearly two-hundred years ago.

Is there magic here? Maybe. Is there life and passion? Definitely. There is a story in this image. Certainly the details will emerge in my work in the form of setting and atmosphere.

Regardless of how I use it, this window opens onto a time I can now visualize more clearly, less blurred by my modern perspective.