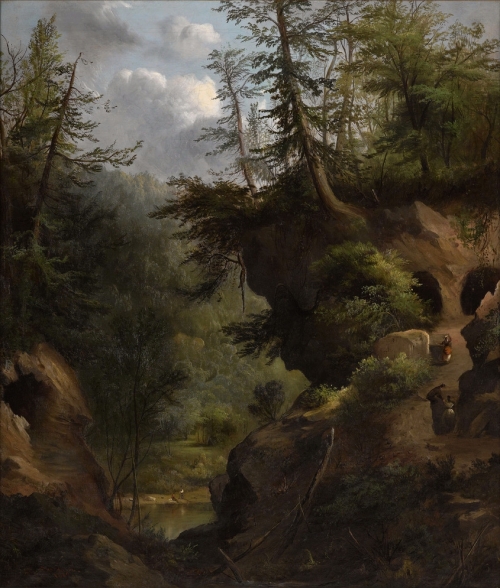 The Caves, by Robert S. Duncanson, 1869 is thought to depict Hocking Hills State Park in Ohio. Three caves are shown with people climbing to the caves on the right. In the center background on the shore are tiny human figures. A self-taught artist, Duncanson was inspired by the Hudson River School, a mid-19th century American art movement embodied by a group of landscape painters  whose artistic vision was heavily influenced by romanticism.

Robert Seldon Duncanson was one of few African American landscape painters of the nineteenth century, and he achieved levels of success unknown to his contemporaries. Richard Powell of American Visions says that Duncanson’s success is a “victory over society’s presumptions of what African-American artist should create.” Duncanson became nationally and internationally known for his landscape paintings modeled after the Hudson River School tradition, and is credited with developing the regional Ohio River Valley art form.  Art historian Joseph D. Ketner claims that Duncanson’s greatest contribution to art was “his distinctively picturesque-pastoral vision of landscape painting with allusions to popular romantic literature.”

Comments Off on #FineArtFriday: The Caves, by Robert S. Duncanson