Jasper Francis Cropsey created many paintings of Greenwood Lake, a freshwater lake on the border between New York State and New Jersey, beginning in 1843. Over the next few decades, Cropsey painted numerous scenes of the area, many from the same viewpoint on the lake as today’s featured paintings, each with varying intensities of color.

What I love about these two paintings, done years apart, is  difference in the quality of  the light. One is done in an early autumn, the other later in the season. The subject matter is similar, cows drinking at waters edge, fishers and their rowboat, but the trees are different, more mature in the second, and it is later in the evening.

Clearly, this was a place that was beloved by the artist, as he returned year after year, and made many landscapes of this beach and the surrounding area. 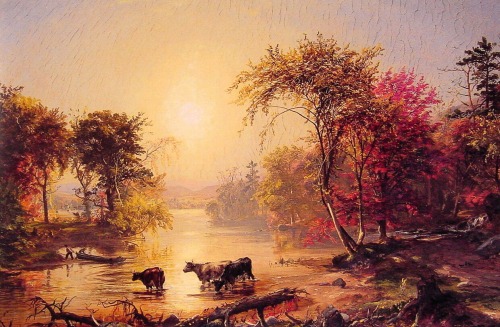 About the artist (Via Wikipedia):

Jasper Francis Cropsey (February 18, 1823 – June 22, 1900) was an important American landscape artist of the Hudson River School. He was best known for his lavish use of color and, as a first-generation member from the Hudson River School, painted autumn landscapes that startled viewers with their boldness and brilliance. As an artist, he believed landscapes were the highest art form and that nature was a direct manifestation of God. He also felt a patriotic affiliation with nature and saw his paintings as depicting the rugged and unspoiled qualities of America.

Jasper Cropsey died in anonymity but was rediscovered by galleries and collectors in the 1960s.