Existence and Past Subjunctives revisited #amwriting

Because we are deep in depths of NaNoWriMo and it is Thanksgiving week, I am neck deep in cooking and writing. So, today I’m serving a post from last year—a little treatise on existence and verb forms. Enjoy!

Grammarians are philosophers. You can find us in darkened chat rooms. We argue about existence, to be or not to be, and postulate theories that are subjective, doubtful, and often hypothetical.

Or, at least, the words and rules to describe existence can be murky.

We call them Subjunctive Verbs. 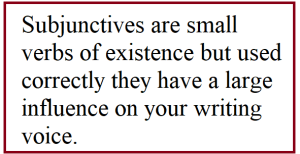 When you go out to Wikipedia, the whole subjunctive verb thing looks quite complicated, but it doesn’t have to be. The subjunctive (in the English language) is used to form sentences that do not describe known objective facts. So today, we are once again looking at Past Subjunctives: the verbs was and were.

But first, what does “subjunctive” mean?

1.(in English and certain other languages) noting or pertaining to a mood or mode of the verb that may be used for subjective, doubtful, hypothetical, or grammatically subordinate statements or questions, as the mood of ‘be’ in ‘if this be treason.’

2.the subjunctive mood or mode.

3.a verb in the subjunctive mood or form.

First, let’s consider existence and what Past Subjunctive Tense covers: how to use the words ‘was’ and ‘were,’ which are forms of the verb ‘be.’

If I only wish I were a penguin, were is correct. If I could actually be a penguin, was would be correct and I would have to rewrite my sentence, by changing ‘would’ to ‘could.’

The Grammar Girl goes farther. She says: Believe it or not, verbs have moods just like you do. Yes, before the Internet and before emoticons, somebody already thought it was important to communicate moods. So, like many other languages, English has verbs with moods ranging from commanding to questioning and beyond. The mood of the verb “to be” when you use the phrase “I were” is called the subjunctive mood, and you use it for times when you’re talking about something that isn’t true or you’re being wishful.

I love that clue—that verbs can be wishful.

The Grammar Girl gives us a great example: Think of the song “If I Were a Rich Man,” from Fiddler on the Roof. When Tevye sings “If I were a rich man,” he is fantasizing about all the things he would do if he were rich. He’s not rich, he’s just imagining, so “If I were” is the correct statement. This time you’ve got a different clue at the beginning of the line: the word “if.”

English tends to favor fewer subjunctives than some other languages. So why are some grammarians ranting about irrealis mood and were?

(And what the hell does that mean?)

The irrealis mood is an older, nineteenth century label for a verb mood. Simply stated, it means that language can express fact (what is real) and can indicate fallacy (what is unreal). It was identified by the linguist, Roman Jakobson.

English has a formula for expressing the unreal: the irrealis mood, but that label is no longer as well-known as its modern label: the past subjunctive verb form. This verb form expresses a hypothetical condition in present, past, or future time:

Steven Pinker, in his extremely convoluted book on language and usage, The Sense of Style, discusses the word, irrealis. He offers several complicated explanations but eventually gets to the point, and I will boil it down here:

There are times when we use a form of the verb ‘was’ even though the subject of the sentence has not yet happened or may not happen at all:  the past subjunctive verb form. It is unreal and may remain that way. “If I were.”

When you are supposing about something that might be true, you use a form of the verb “was” and don’t sweat it.

If it’s likely real: Was (possibly is) I heard he was training his dog to fetch.

If it’s likely unreal: Were (possibly isn’t) If I were a penguin, I wouldn’t need to rent a tuxedo.

We are still talking existence here. Remember from above? The past subjunctive verb forms express a hypothetical condition which may exist in present, past, or future time:

What if you are writing a technical manual, a dissertation, or an email to a client or coworker? Despite the ill-conceived efforts of many critique groups and Microsoft Word to erase all forms of ‘to be’ from the English language and replace it with ‘is,’ you have a right to use the subjunctive verb form if you choose to do so. Write with your own sense of style.

When your intent is formal, subjunctives may abound, often in the form of commonly used phrases:

Steven Pinker has a point that is important to this blogpost: Subjunctives are hard to spot. Forms of “to be” can be found in subordinate clauses where something is mandated or required:

A verb like “see” also has a subjunctive form when something is mandated or required: 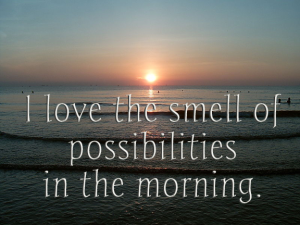 In ordinary writing, we rarely need to use subjunctives in clauses with mandates except perhaps to show a formal conversation.

Subjunctives are small verbs of existence but used correctly they have a large influence on your writing voice.

And, thanks to Steven Pinker, we now know that if someone drops the word “irrealis” on you at a critique group, it’s a hint that they are fond of obscure, nineteenth century words. Surprise them by telling them the past subjunctive verb form is your friend, and you enjoy using it appropriately.

Existence and Past Subjunctives by Connie J. Jasperson, © 2017 first appeard here on Life in the Realm of Fantasy on November20, 2017.

11 responses to “Existence and Past Subjunctives revisited #amwriting”