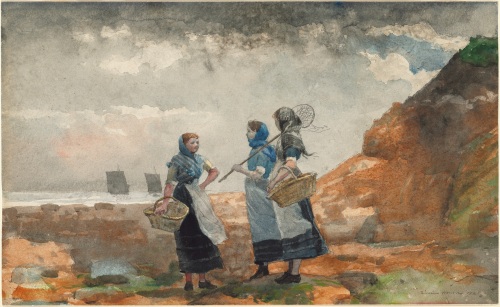 In Three Fisher Girls, Tynemouth,  Winslow Homer captures the personalities and the youth of the girls who comb the cold beach for shellfish. The viewer wonders, are they good friends, or perhaps sisters? Rain has darkened the day and scarves protect their ears from the wind, yet they’ve rolled their sleeves up and fish in their ordinary work dresses. These hardy young women feed their family, and perhaps they gather enough extra to sell.

About this Image, Via Wikipedia:

Homer spent two years (1881–1882) in the English coastal village of Cullercoats, Tyne and Wear. Many of the paintings at Cullercoats took as their subjects working men and women and their daily heroism, imbued with a solidity and sobriety which was new to Homer’s art, presaging the direction of his future work. He wrote, “The women are the working bees. Stout hardy creatures.” His works from this period are almost exclusively watercolors. His palette became constrained and sober; his paintings larger, more ambitious, and more deliberately conceived and executed. His subjects more universal and less nationalistic, more heroic by virtue of his unsentimental rendering. Although he moved away from the spontaneity and bright innocence of the American paintings of the 1860s and 1870s, Homer found a new style and vision which carried his talent into new realms.

About the Artist, via Wikipedia

Winslow Homer never taught in a school or privately, as did Thomas Eakins, but his works strongly influenced succeeding generations of American painters for their direct and energetic interpretation of man’s stoic relationship to an often neutral and sometimes harsh wilderness. Robert Henri called Homer’s work an “integrity of nature”.American illustrator and teacher Howard Pyle revered Homer and encouraged his students to study him. His student and fellow illustrator, N. C. Wyeth (and through him Andrew Wyeth and Jamie Wyeth), shared the influence and appreciation, even following Homer to Maine for inspiration.  The elder Wyeth’s respect for his antecedent was “intense and absolute” and can be observed in his early work Mowing (1907). Perhaps Homer’s austere individualism is best captured in his admonition to artists: “Look at nature, work independently, and solve your own problems.”