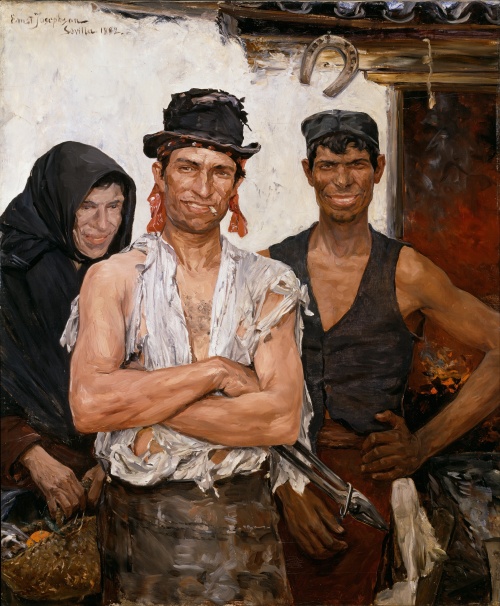 What I love about this image:

This is a powerful painting. Josephson captures the boundless self-confidence and personalities of these young men. He has managed to portray their cock-of-the-walk swagger, and he has shown us the truth of their craft: that sparks fly and ruin their clothes; that the work is hard and their muscles strong. These men are full of life.

The influence of Josephson’s having studied Rembrandt’s works closely can be seen here in the style with which he has painted their features. He has painted the men with truth—they are not classically handsome, but they are in the prime of life and have immense charisma. They wear their burned and ragged hats with pride. These men are good at what they do, and they know it. Their eyes dance and flirt outrageously with you across the years—they are full to bursting with machismo, daring you to just try to walk past and not notice them.

About the Artist, Via Wikipedia

(Ernst Josephson) was born to a middle-class family of merchants of Jewish ancestry. His uncle, Ludvig O. Josephson (1832-1899) was a dramatist and his uncle Jacob Axel Josephson (1818-1880) was a composer. When he was ten, his father Ferdinand Semy Ferdinand Josephson (1814-1861) left home and he was raised by his mother, Gustafva Jacobsson (1819-1881) and three older sisters.

At the age of sixteen, he decided to became an artist and, with his family’s support, enrolled at the Royal Swedish Academy of Fine Arts. His primary instructors there were Johan Christoffer Boklund and August Malmström. He was there until 1876, when he received a Royal Medal for painting.

After leaving the Academy, he and his friend and fellow artist Severin Nilsson (1846-1918) visited Italy, Germany and the Netherlands, where they copied the Old Masters. His breakthrough came in Paris, where he was able to study with Jean-Léon Gérôme at the École des Beaux-Arts. He soon began concentrating on portraits, including many of his friends and fellow Swedes in France. For a time, he shared a studio with Hugo Birger (1854–1887). His personal style developed further during a trip to Seville with his friend, Anders Zorn, from 1881 to 1882.

His private life did not go well, however. By his late twenties, he was afflicted with syphilis. His romantic life suffered as a consequence, as he was forced to break off a promising relationship with a young model named Ketty Rindskopf.