Here in the northern hemisphere, summer is winding down. The fall quarter of school begins today, and pumpkin spice lattes are suddenly available everywhere. During the summer I read several books that I would like to share with you. 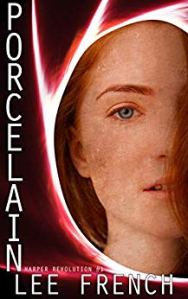 First off, I chain-read the first two books in the sci-fi Harper Revolution series by Lee French.

The series opens with the book Porcelain. Eighteen-year-old Emma Harper is struggling. Her beloved older brother joined the Marines and has been declared missing in action. To please her emotionally distant father, she is slated to attend a college she doesn’t want, to follow in his footsteps in a field she has no affinity for—accounting. Emma is a math whiz and an inventor. She loves all things physics and science. She has a mechanical mind and can build anything. She reads and absorbs every new paper that is published in the field of physics. Unfortunately, since her brother’s disappearance, she has fallen in with a bad crowd, ‘friends’ who bully and torment her, a boyfriend who regularly forces himself on her. She has developed bulimia. She knows it’s not right but can’t seem to stop the cycle of binging and spending much of her time purging—hence the title of the book, Porcelain. One bad day, Emma is looking in a mirror when a portal opens, taking her to a mysterious living spaceship where she finds her brother and the soldiers who remain in his unit. Using the alien technology that had originally kidnapped them, her brother, Ethan, had been trying to return home but ended up transporting Emma to them. Her skills as an engineer become integral to their plan to return to Earth. This series continues with Crawlspace, which raises the stakes.

Emma is a compelling character with genuine real-world problems. I must admit—I can’t wait for the next book in this series.

After this, I read “Nine Perfect Strangers” by Australian author, Liane Moriarty.

The book details the experiences of nine people booked into an exclusive Australian health spa, and three members of the staff.

Moriarty introduces us to The Cast of Characters by opening with Yao and his experience as an EMT and introducing us to Masha as she suffers a heart attack.

The story picks up ten years later when nine people meet at an exceedingly remote health spa that promises to change their lives and completely transform them in ten days. The recommendations by their friends and the reviews they have read are glowing, but none explain how the transformation will be accomplished.

Each guest arrives with secrets and personal reasons for wanting to be remade into something better that what they believe they are. Masha is later revealed as the benevolent antagonist, and Yao has become her disciple.

Liane Moriarty’s characters are intensely compelling. At the outset, she establishes each as an individual and endows them with a mystery. Immediately the reader is hooked.

I hated setting the book down, wanting to know everyone’s dark secrets, curious as to what led each one to book themselves into that very unusual health spa. Structurally, it’s a bit jerky, and the ending is a series of short infodumps, but it works. By the time I reached the startling conclusion, I was looking forward to the informational epilogues just because I didn’t want to let the characters go.

My final book of the summer, which I only just finished, was Hidden Pictures, a debut novel by Johanna Flynn.

This novel takes us into the shadowy places of the soul, laying bare the dark events and incidents that change our lives. The story gives you pause, exposing the moral issues we choose to ignore. Gordon Carlson is an engaging character. His strength and resilience are tested again and again, despite the bullying, as is Olivia’s.

While this book is set in the 1990s, it has a strong connection to present day issues. The cycle of abuse is explored, showing how sometimes victims become predators as a way of coping.

Themes of predatory sexual behavior and the myriad forms of violence, both mental and physical, that bullies often employ to keep control of their victims are dealt with in an open and respectful way. The wide spectrum of victim shaming is laid bare, deftly and with compassion. This is a touching story, one that stayed with me long after I finished reading it.

I highly recommend this book, and if you are looking for your next book club read, this is the book for you.

All in all, it was a great summer for reading as well as writing. I don’t have the chance to read as much as I used to, but I manage to fit a few books into my schedule. I have two more books on tap and will talk about them in the coming weeks. In the meantime, I highly recommend each of these books. Enjoy!