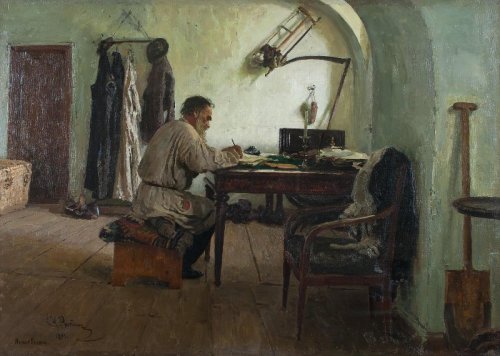 About the Subject of this painting, via Wikipedia:

Born to an aristocratic Russian family in 1828,[3] (Count Lev Nikolayevich Tolstoy) Leo Tolstoy is best known for the novels War and Peace (1869) and Anna Karenina (1877),[8] often cited as pinnacles of realist fiction.[3] He first achieved literary acclaim in his twenties with his semi-autobiographical trilogy, Childhood, Boyhood, and Youth (1852–1856), and Sevastopol Sketches (1855), based upon his experiences in the Crimean War. Tolstoy’s fiction includes dozens of short stories and several novellas such as The Death of Ivan Ilyich (1886), Family Happiness (1859), and Hadji Murad (1912). He also wrote plays and numerous philosophical essays.

Repin was born in Chuguyev, in Kharkov Governorate, Russian Empire (now Chuhuiv in Ukraine, Kharkiv Region) into a family of “military settlers”.[2] His father traded horses and his grandmother ran an inn. He entered military school to study surveying. Soon after the surveying course was cancelled, his father helped Repin to become an apprentice with Ivan Bunakov, a local icon painter, where he restored old icons and painted portraits of local notables through commissions. In 1863 he went to St. Petersburg Art Academy to study painting but had to enter Ivan Kramskoi preparatory school first. He met fellow artist Ivan Kramskoi and the critic Vladimir Stasov during the 1860s, and his wife, Vera Shevtsova in 1872 (they remained married for ten years). In 1874–1876 he showed at the Salon in Paris and at the exhibitions of the Itinerants’ Society in Saint Petersburg. He was awarded the title of academician in 1876.

In 1880 Repin travelled to Zaporizhia to gather material for the 1891 Reply of the Zaporozhian Cossacks. His Religious Procession in Kursk Province was exhibited in 1883, and Ivan the Terrible and His Son Ivan in 1885. In 1892 he published the Letters on Art collection of essays. He taught at the Higher Art School attached to the Academy of Arts from 1894. In 1898 he purchased an estate, Penaty (the Penates), in Kuokkala, Finland (now Repino, Saint Petersburg).

In 1901 he was awarded the Legion of Honour. In 1911 he traveled with his common-law wife Natalia Nordman to the World Exhibition in Italy, where his painting 17 October 1905 and his portraits were displayed in their own separate room. In 1916 Repin worked on his book of reminiscences, Far and Near, with the assistance of Korney Chukovsky. He welcomed the February Revolution of 1917, but was rather skeptical towards the October Revolution. Soviet authorities asked him a number of times to come back, he remained in Finland for the rest of his life. Celebrations were held in 1924 in Kuokkala to mark Repin’s 80th birthday, followed by an exhibition of his works in Moscow. In 1925 a jubilee exhibition of his works was held in the Russian Museum in Leningrad. Repin died in 1930 and was buried at the Penates.

Comments Off on #FineArtFriday: Portrait of Leo Tolstoy by Ilya Repin 1891